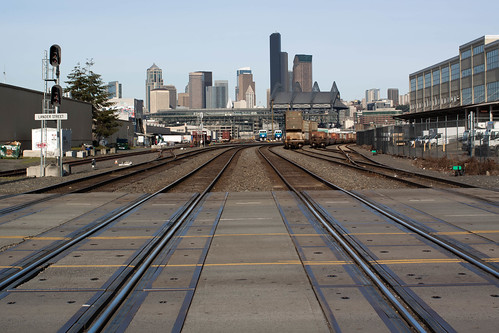 A couple of months ago, I blurbed a survey for King County Metro’s Community Connections project, which was seeking input from people who work in Seattle’s SODO district, a mostly-industrial and commercial area immediately south of downtown. I noticed that the SODO Connections project seemed very focused on alternative service — i.e. not fixed route bus service — and I had some questions about that. Here are my questions and the answers I was given; I have some comments at the end.

Seattle Transit Blog: One of the approaches mentioned on the page — flexible-route service — is typically used in low-density suburban or rural environments, which don’t look much like SODO. The other — on-demand ridesharing — seems already to be covered by a thriving private market.

Scott Gutierrez, King County Metro: These are just some of the options Metro has developed as part of the Community Connections program. Our main program website has information on the kinds of services we’ve developed so far as well as current pilot locations.

We’re still early in our outreach process for the SODO project, so we have not yet determined what specific services we will pilot there. Based on the results of our outreach, we might propose something similar to services we developed in other communities, or we might come up with a transportation pilot that is completely new to Metro.

STB: What’s the niche Metro is trying to fill with these alternative service methods?

Before we determine what specific niche we can best serve, we need to better understand these transportation gaps and barriers that exist for workers in SODO. The information above, and feedback from a stakeholder group, informed the survey we are asking people to take. Results of this survey will help our stakeholder group to articulate a set of transportation needs for our Community Connections pilot to address. Those articulated needs in turn will inform our solution design.

More interview and commentary after the jump

STB: How will the costs of these alternative service methods be compared to the possibility of operating more fixed route service, or of restructuring existing service?

Metro: As we are still assessing community transportation needs, we have not yet determined the solution(s) we will pilot in SODO. With that said; developing solutions to community needs that are both innovative and cost-efficient is a main focus of the Community Connections program, and these pilot projects have proven to be consistently less expensive to operate than fixed-route service.

STB: The principal fixed-routes which serve SODO — 124, 131, 132 — have extremely tight stop spacing, both in SODO and at some points south, down to 750′ in some cases. This clearly violates Metro’s quarter-mile service guideline, degrading service speed and reliability.

a. Will this project consider a program of stop consolidation on the fixed routes serving SODO?

However, there are fixed-route changes on the horizon in SODO as the Alaskan Way Viaduct decommissioning and the Lander Street overpass construction projects get underway. While fixed-route changes arising from these projects will have their own public outreach processes, information we gain from our Community Connections project will help inform our service planners about needs in the community.

b. Will this project consider spot improvements to improve speed and reliability on the fixed routes serving SODO?

However, independently of our Community Connections work, Metro is working to implement Transit Signal Priority (TSP) at 4th Avenue S & S Lander Street in coordination with SDOT. TSP at this location will grant the Routes 21 and 116, making the eastbound-left turn from S Lander Street onto 4th Avenue S, a green-light extension or an early green light. Implementation is scheduled for the beginning of August 2017.

I have a few distinct reactions to Metro’s plans, some of them slightly contradictory; let’s start with the positive stuff.

First, the need Metro and SDOT have identified is real. SODO’s street grid is characterized by extremely long, skinny north-south blocks with intermittent sidewalks; a complete lack of connectivity to neighborhoods east and west; busy, multi-track railroad crossings; and incessant fast-moving vehicles on the main streets. The only thing resembling a coherent local transit corridor is on 4th Ave S, and the only extant bike infrastructure is over on East Marginal, on the far side of another rail yard. Overall, walking around SODO reminds me of the setting of Repo Man more than anything else.

Second, looking at some aspects of SODO transit through the lens of alternative service is probably a smart move. There’s no sane way to connect a crosstown local service through the area, and “neighborhood circulator” buses have proved repeatedly to be an expensive way of moving a tiny number of people. A subsidized Lyft Line or Uber Pool could well provide local mobility in a way that’s both cheaper to the taxpayer and more convenient to the customer than any kind of service Metro would operate directly.

Third, more generally, this kind of effort helps move the public conversation away from breathless speculation about what ride-hailing services are going to do to transit, to a more constructive conversation about how they can work with fixed-route services to improve mobility. In this respect, Metro’s Community Connections project dovetails with other recently announced projects, such as Seattle’s Mobility Playbook and Uber’s partnership with Sound Transit and South King cities. It’s good that our regional agencies are working to shape this conversation, because it’s going to define much of the future of mobility.

My concern with this project is a continuation of my central, long-held critique of Metro: much of the agency’s fixed-route bus service remains stubbornly mediocre. Ridership is booming county-wide, but especially on the corridors (like RapidRide) where Metro has made a concerted effort to rationalize alignment and stop spacing, and raise the frequency and reliability of service. By contrast, many of the fixed routes in SODO are a throwback to the sad state of many Metro routes that I recall from when I moved to Seattle in 2010.

Let’s look at some particular issues and potential solutions that have explicitly been defined out of the scope of Metro’s Connections project:

Metro might well study suggestions like these as part of the Alaskan Way/Lander St processes Gutierrez describes above, and it probably makes sense to hold off on any potential changes to Route 21 until they can be considered holistically with other short- and long-term alignment decisions; but there’s not really any reason why the first two ideas need to wait for anything.

As with so much of Metro’s work, the Community Connections project seems likely to succeed on the limited terms the agency has defined for itself. What’s lacking is any sense that the agency is swinging for the fences, trying to make itself the best service it can be, in every place it has a major presence or where transit can be a serious alternative to driving. People who ride fixed-route service daily in SODO — who considerably outnumber the people who are likely to ride any alternative service — will continue to pay the price for this institutional lack of ambition.