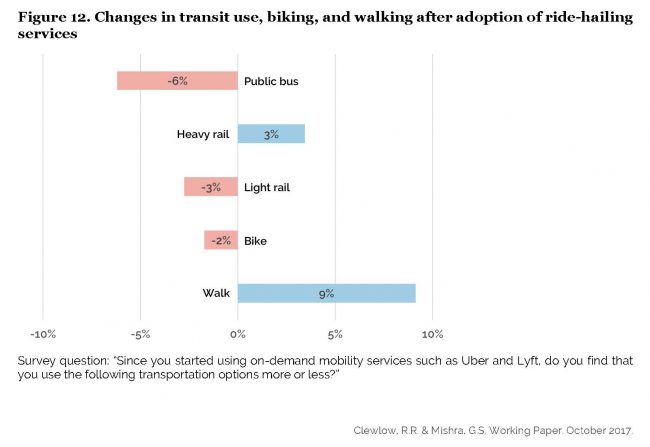 As ride-hailing services grow in popularity and transit use declines in many cities, a new study reports Uber and Lyft are luring bus and light rail riders from the public transportation system. The study collected data from 7 major U.S. cities, including Seattle.

Previous studies suggested shared mobility services were complementing public transit, but researchers at the U.C. Davis Institute of Transportation Studies found ride-hailing services have reduced the use of bus services by 6 percent and light rail by 3 percent. The data did show ride-hailing serving as a complementary mode of transportation with commuter rail services, with ridership increasing 3 percent. High-quality, long-haul transit actually benefits from improved access while short-haul, low-quality transit has a lot to lose.

A 2016 U.C. Berkeley study found that of Seattle’s 54,000 Car2Go members at the time, about 3 percent sold their car and a further 9 percent abandoned plans to purchase another. Although most Car2Go users increased their Vehicle Miles Traveled (VMT) by moving trips from transit to Car2Go, this gain in VMT was more than offset by people that sold their vehicles and therefore paid for car use by the mile.

However, there are important differences in ride-hailing and car-sharing; cost, ease of access, and likelihood of traveling in a group.

“Although we found that ride-hailing can be complementary to transit and reduce vehicle ownership for a small portion of individuals, we found that (overall) these services currently facilitate a shift away from more sustainable modes towards low occupancy vehicles in major cities,” wrote the lead author of the report, Regina Clewlow, in a statement.

“It’s a sign that those transit systems aren’t meeting the needs of the traveling public,” said Andrew Glass Hastings, transit and mobility director at SDOT.

However, with increasing transit ridership in Seattle, that conclusion doesn’t apply here, said Hastings.  Instead, he argued that “we can’t meet demand fast enough, and ride-hailing services are filling that need.”

With Seattle’s rising transit ridership, Hastings said other cities are beginning to follow the city’s lead reconfiguring their transit and street system, in part by prioritizing lanes for transit. And SDOT continues to make investments in HOV lanes, Hastings said, pointing to the seven RapidRide corridors planned — two-thirds of the Madison Street BRT line will be a dedicated transit lane.

The U.C. Davis study was based on a survey of 4,000 residents, suburban and urban, living in or near seven metro areas, including Seattle, New York, Chicago and Los Angeles.

Slow service, unreliability and lack of frequency topped respondents lists as reasons for using ride-hailing instead of transit services. And parking constraints and alcohol use were top reasons ride-hailing users gave for using the service rather than driving themselves.

When respondents were asked if Uber and Lyft were unavailable, thirty-nine percent said that their trip would have still been made with a car, either by driving themselves, using a carpool or taking a taxi. 61 percent of people surveyed said they wouldn’t have taken the trip or instead would have walked, biked or taken transit.

The authors said this suggests “that ride-hailing is likely adding vehicle miles traveled to transportation systems in major cities.”

Overall, the vast majority of respondents (91 percent) said the availability of ride-hailing services did not influence their car ownership, while nine percent had sold at least one vehicle. 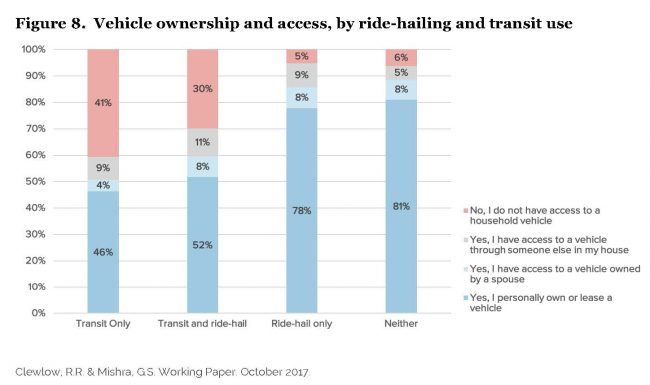 The authors say congestion pricing and enforcing priority lanes for high-occupancy vehicles are tools cities can use to reduce the number of vehicle miles traveled that ride-hailing services are adding to roads.

One option in SDOT’s mobility playbook to ensure ride-hailing services continue to complement the existing transit landscape in Seattle, rather than siphoning off passengers back into cars, includes dynamically managing high-occupancy-vehicle-only lanes in dense areas throughout the city. Similar to express toll lanes, dynamically managing HOV lanes would allow usage to change based on demand or time of day.

The playbook also states the city needs the “right mix of incentives and disincentives to keep ride-hailing, even autonomous vehicles from cruising around empty while they wait for customers.”

“A lot of that can be done through pricing,” Hastings said. For instance, such a system could charge high prices for trips without a passenger or use congestion pricing to make travel during busy times more expensive, he added.

Riders can expect more city HOV lanes in the future, Hastings said, pointing to the seven rapidride corridors planned — two-thirds of the Madison Street BRT line will be a dedicated transit lane.

9 Replies to “Are Ride-Hailing Services Helping or Hurting Transit?”