Distance-based fares have a lot of fans among transit nerds, for a number of reasons, from practical – raising more revenue when the train lines become really long – to the patently absurd, such as that they will incentivize people to live closer to their jobs or incentivize Sound Transit not to build really long lines. The latter has already been disproven.

Distance-based fares have had some practical impacts we didn’t see coming in 2009.

Seniors 65+, riders with disabilities, youth under 19, and holders of ORCA LIFT (low-income) cards are blessed with not having to deal with the complexity of distance-based fares on Link, and get to buy full-length tickets and day passes from stations in the middle of the line. To further simplify the distance-based fares, ST made the fares to and from each of the downtown stations the same, moving away from the strict distance formula.

Moving to a flat fare of $2.75, at least for the time being, would bring some new slickness to Link operations:

Getting rid of “tap off” would cause Sound Transit to give up some valuable data. But Sound Transit has been uninterested in changing the “tap off” sound to be distinct from the “tap on” sound. If they can’t make that simple fix, then getting rid of “tap off” altogether is the next best fix for Sound Transit to help itself do a better job of collecting the correct fare, and to stop harassment of very frequent riders who have made a best-faith effort to pay their fare, including those who have pre-paid with a sufficient pass or have a valid transfer covering sufficient value.

At the same time, Sound Transit is forgoing a chunk of fare revenue by having distance-based fares at this stage of Link Light Rail development.

Station boarding/alighting data from the 2018 Draft Service Implementation Plan (See page 79.) shows most trips are getting charged less than $2.75. For simplicity, let’s assume travel patterns for reduced-fare riders aren’t dramatically different from those of full-fare riders.

56% of southbound weekday riders are alighting by Mt. Baker Station or boarding at Tukwila International Boulevard Station or SeaTac Airport Station, and therefore paying no more than $2.50. Similarly, 56% of northbound weekday riders are boarding at Mt. Baker Station or later, or alighting at SeaTac Airport Station or Tukwila International Boulevard Station, and therefore paying no more than $2.50. The total number of passengers paying $2.50 or less is much larger, since there are plenty of $2.25 and $2.50 trips in the middle of the line, but the precise number can’t be teased out just from this data.

To pay more than $2.75, you have to travel between Rainier Beach Station and Tukwila International Boulevard Station, which only 28% of riders are doing. A chunk of those rides are paying less than $3.00 of course, but the data doesn’t provide a clear path to that number. 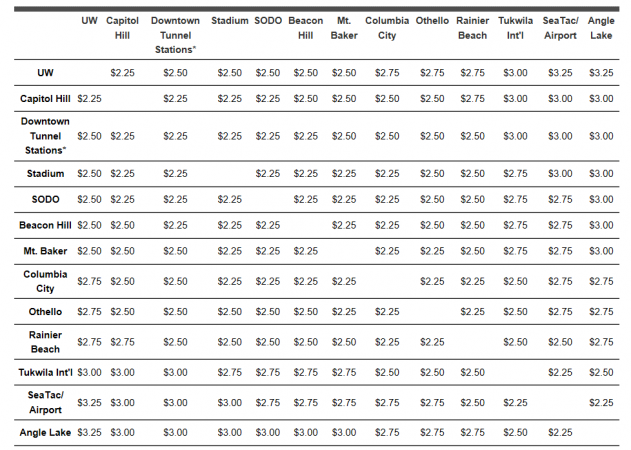 Since a clear majority of regular fares are $2.50 or less, the average applicable regular fare will be less than $2.75. The real fare charged has to account for shared revenue among multiple rides due to transfers and passes, but the math remains the same, in that Sound Transit would get more for each of those rides on average by charging a flat $2.75 fare.

Sound Transit is leaving fare revenue on the table, while inconveniencing lots of riders just trying to pay their fare.