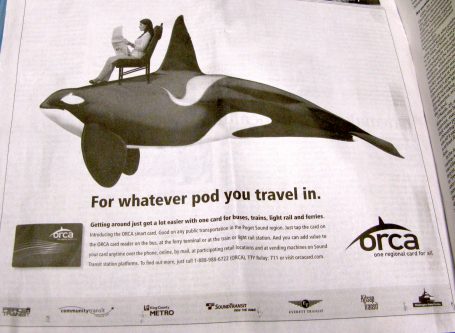 The concept and design for Next Generation ORCA (ngORCA) has not changed from when it was announced as ORCA2 in 2015 but we now know in greater detail how it will work. Specifications for Next Gen ORCA have been published on the project’s website for people who want to dive deep into the system. As the document is intended for the vendor that will implement and operate the system, it covers every aspect imaginable. I have selected a few notable features that will make you look forward to Next Gen ORCA when it launches in 2021.

Next Gen ORCA is an accounts-based system. I explained what that means and how it differs from today’s ORCA in the ORCA2 post. The key feature of this change is eliminating the 24-hour delay between purchasing fare online and being able to use it. The delay is eliminated thanks to real time communication between validators in the field and your account in the backend.

A transit account can be of any passenger type (adult, youth, senior, etc.). Like current cards, multiple fare products like stored value (e-purse) and passes can be loaded and used at the same time. A transit account is automatically created when a credential is purchased or added to the system.

Transit accounts have the option of being associated with a customer account like those created on the ORCA website. Because everything is in a transit account and not a card, management should be much easier and more flexible than today. Transfering balances between two cards can be done in an instant. Lost cards can be replaced quicker. A family can have one account managing each member’s card with fares being paid from a shared purse.

The ORCA mobile app for Android and iOS will allow customers with NFC-capable phones to skip buying a card altogether by using their phone as a “virtual card”. The mobile app can also convert a physical card into a mobile virtual card. An example of this feature can be seen with Suica card integration with Apple Pay in Japan.

The mobile app will make it easy to get and reload cards on the go. Stored value can be used as full or partial payment for a pass, meaning no more unspendable quarters in your e-purse.

Aside from cards provided for the initial launch by the system vendor, Next Gen ORCA cards will be procured through a competitive process. This should lower card costs by not locking agencies to the original vendor. These cards are designed for “extended use” (EU), meaning a durable, reusable card that lasts years as opposed to a “limited-use” disposable card. Limited-use cards will not be available at launch but are an option that may be used in the future.

ORCA only has about 125 retailers spread across four counties. Next Gen ORCA’s retail network “will consist primarily of merchant locations that currently sell prepaid debit cards (e.g., gift cards)”. The goal is to have ORCA cards available in many more retailers than present and reach more people who do not have bank accounts. Portland’s recently launched Hop card has over 500 retailers in a much smaller area.

When you tap your card on a validator, you should get a payment result within half a second (500 ms). That split second includes identifying your card, the round-trip to and from the backend for processing and receiving a response, and writing data back to the card.

Validators communicate with the backend in real time over a wireless or wired network. Because communications can be unreliable in some places or times, the system can operate offline using data previously written to the card. Strategies will be developed to mitigate the risk of fraud.

Validators will have bright full color displays capable of animation and can output audio tones including speech. The specs call for “ADA-compliant visual and audible indicators that provide distinctive messages for approval or denial of all fare media validations and validator status. All validator visual and audio output will be fully configurable”. So implementing different sounds for tap-on, tap-off, cancelled trip, etc. should be possible.

Although the mobile app will not support barcode-based payment, the validators have the capability to be upgraded with more memory and ancillary devices like a barcode scanner.

What’s interesting about the onboard validator is that it will be location aware using the bus’s onboard systems. Raw GPS coordinates and stop ID are recorded with every fare transaction. This will provide planners with valuable stop-level boarding data to supplement existing data from passenger counters.

Both types will allow customers to purchase and reload ORCA cards as well as paper tickets. Cash and credit cards are accepted for payment but the LFVM will not return change. Instead, any overpayment would be deposited as stored value to the card’s transit account or forfeited in the case of paper ticket purchases.

Machines can be configured to offer the option of an “express” purchase which is a card with single-trip fare right from the home screen.

I imagine LFVMs replacing the current parking-style ticket machines at streetcar and Swift stations. Those machines only dispense paper tickets and do not have ORCA functionality.

Per the published specs, the system will support the various fare structures, policies, and products currently in use by the agencies as well as some capabilities for future use when additional modes are integrated into ORCA. Here is a sampling:

Whether recent and future fare structure policy decisions will affect what is ultimately implemented remains to be seen. I already read conflicting statements that Next Gen ORCA will not support trip-based peak pricing. However, Metro’s move to a flat fare makes that an optional capability. It looks like the specs were written to cover all bases but it would be nice to have the ability to implement all sorts of fare products without additional development.

The core system will launch in 2021-2022. The legacy ORCA system will be switched off in 2022 when the transition is complete. Phase II will then begin in 2023-2024. In this phase new projects such as “[Kitsap Fast Ferries] reservation system integration, expansion to other transit agencies, and further integration with both vanpool and Americans with Disabilities Act (ADA) paratransit [scheduling]” will be implemented.

Other “potential future projects” have been listed as: