The King County Council recently approved a $2.75 all-the-time flat fare, which will take effect in July of 2018. This will eliminate most of the passenger-requested resets on ORCA readers that require operators to push some buttons on the reader, and eliminate one more source of fare arguments. Community Transit has followed suit on the ORCA reader resets by proposing that each of its commuter routes have a single fare for each payer category.

Sound Transit hasn’t yet put forward a similar proposal to get rid of ORCA reader resets on inter-county ST Express bus routes, but has been looking at the issue. Any ST Express fare restructure would likely be implemented in latter 2018.

The thirteen routes that could end up with an automatic 2-county fare for all passengers are listed below, in order of percentage of riders on a typical weekday who do not cross a county line, using data from the 2018 Service Implementation Plan. 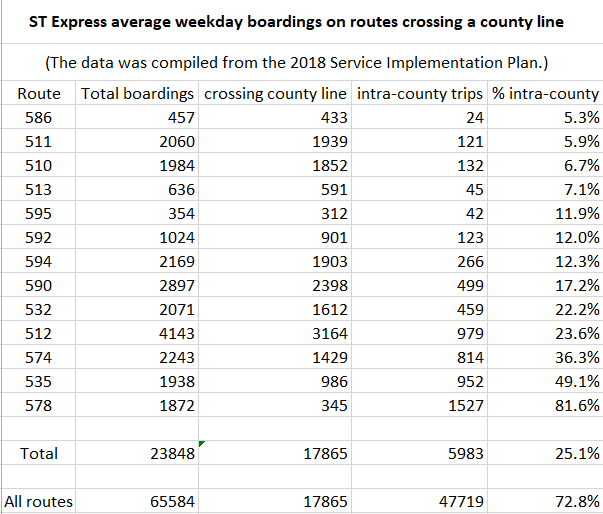 25.1% of weekday riders on these multi-county routes (9.1% of total ST Express ridership) could face the choice of paying a 2-county fare for a 1-county ride or having to take an alternative local route. Simultaneously, the other 74.9% (27% of total ST Express ridership) cold lose the opportunity to request a 1-county fare before taking a 2-county trip.

Some routes clearly ought to charge a 2-county fare, as the vast majority of their riders are riding a long distance, and across the county line. This includes routes 510, 511, 513, and 586. Most of those riding within the county on these routes are using the route for a local ride within Seattle, Tacoma, or Everett, and have frequent alternatives.

At the opposite end of the spectrum is route 578, which is overwhelmingly intra-county trips. ST may as well just make it a one-county “local” fare, especially since route 577 is already that way.

49.1% of the trips on route 535 are intra-county, which can lead to a lot of reset requests. Since it serves a corridor similar to route 532, the two ought to be considered together. But are most of the trips on these routes long distance? The answer to that is not clear from the ons/offs data, but there are plenty of stops on each close to the county line. For the sake of simplicity and speed, ST ought to consider charging a “local” fare on these routes.

While a majority of route 574 trips cross the county line, most of them are neither long-distance, nor truly express. Charging the local fare seems more appropriate for this route that serves SeaTac, Kent-Des Moines Park & Ride, Star Lake P&R, Federal Way Transit Center, Tacoma Dome Station, and Lakewood.

Route 512 gets into a gray area. It serves the same corridor as routes 510, 511, and 513, but it also has lots of stops spaced throughout the corridor. There is only one stop in King County that prevents all the inter-county trips from legitimately being considered “long-distance”: 145th St Freeway Station. However, that stop only has 37 passengers getting on northbound and 32 getting off southbound on a typical weekday.

Route 590 has 100 daily local trips within downtown Tacoma and 407 within downtown Seattle, but a supermajority of the trips are long-distance. Charging a long-distance fare for all riders may displace most local riders to local routes, but that shouldn’t be problematic within these corridors with many routes.

Route 592 has reverted back to terminating at DuPont Station since this data was collected. The DuPont – Lakewood local trips are the only reason not to charge a long-distance fare to all riders. However, the number of riders getting off northbound in Lakewood is 16. Remove the Thurston County riders, and the ridership using route 592 to connect between DuPont and Lakewood is somewhere in the single digits.

Route 594 has 3 daily boardings in DuPont. There are at most 50 going from Lakewood to downtown Tacoma.

Renumbering the routes that charge a long-distance fare as 600-series routes could help riders quickly know what fare to expect.

This fare streamlining could be slightly revenue-negative, even accounting for the time saved by eliminating most passenger-requested ORCA reader resets. A simple way to make it revenue-positive would be to take this opportunity to raise each of the cash fares to the next even-dollar amount. The new slicker fares could look something like this: