On Monday, the Seattle City Council approved a partnering agreement to accelerate Sound Transit 3 project delivery. The   slideshow, the partnering_agreement itself, and Councilmember Lisa Herbold’s thorough writeup are all online.

Most of the agreement is just a commitment to working together and being cooperative, but there are some interesting nuggets. Each agency (ST and SDOT) will have a “designated representative” to serve as a single point of contact, which authority to direct other staff as needed. For ST, this will be Cathal Ridge. SDOT will name their representative by January 15th. There’s a nice review of how Sound Transit’s workflow will be different from previous projects, in an effort to speed things up. 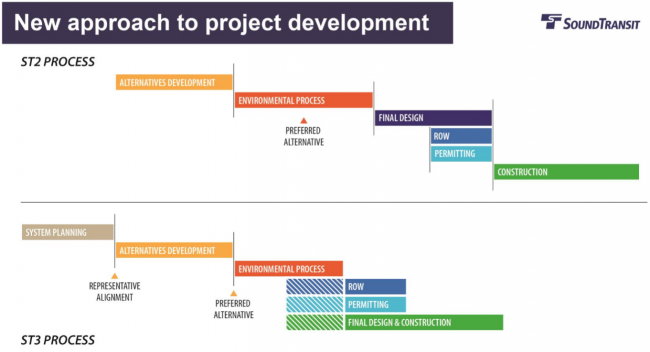 By downselecting to a single alternative prior to the Environmental process, ST hopes for a somewhat shorter EIS period, and can begin a lot of preparatory work (ROW acquisition, permitting, etc) before the process is even done.

There’s also some language to the avoid some of the delay-inducing mission creep that has plagued Lynnwood Link:

In cases where the City or other parties have an interest in changing Project scope beyond that allowed under Sound Transit’s financial plan, the City will collaborate with Sound Transit to identify reductions in scope or risk elsewhere on the Project or provide increased funding through local contributions to finance the requested change.

Finally, the agreement has a schedule for all the steps to get to opening service.  As you can see, the next year is going to be the space to organize for whatever it is you want in the ST3 route through Seattle. 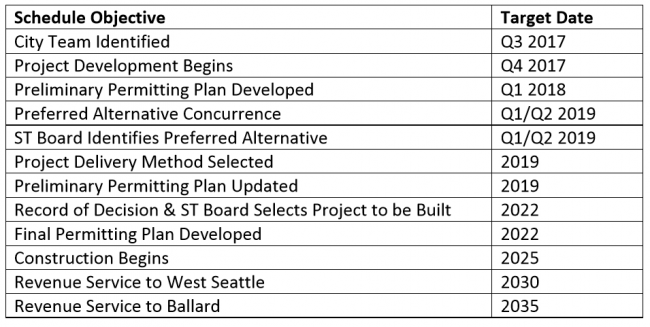