Though it seems insignificant now, cast your mind back to 2007. The Seattle Monorail Project died just two years earlier, after costing the city $125M. A month before the streetcar opening, the Roads and Transit measure to expand light rail had just been defeated. Many people were openly questioning whether rail-based transit had a future in Seattle (Not coincidentally, 2007 is the year STB was founded). Thousands of people crowded into Westlake square to see our shiny new toy. I was working in the neighborhood at the time and recall the insane crowds on opening day.

The Seattle Streetcar system has had its ups and downs over the years. 10 years seems like a good time to look back at the system, and forward as the Center City Connector moves forward.

After ripping up the last of the city’s streetcars in the 1941, Seattle’s modern streetcar system kicked off with the South Lake Union line (setting aside the historic waterfront line). Half the funding was provided by local billionaire Paul Allen, who waned the line as an amenity to kickstart development in what was then the sleepy warehouse district known as South Lake Union.

Since then, mayors and Council members have had varying degrees of enthusiasm for streetcars. The streetcar system has taken on a totemic quality that made it about more than just a transit mode choice: if you were for it, it means you were for real estate development and “placemaking.” To be against it was to be for spending money on More Important Things. As with many things in this town, it became a question of What Do We Want to Be When We Grow Up?

Streetcar fever began in 2003 under the Nickels administration, and picked up steam under Mayor McGinn. The $45M SLU line would spur development, or so the theory went, and Paul Allen’s Vulcan Real Estate would pick up half the tab in the form of a special local improvement district (LID) imposed on (mostly) Vulcan-owned properties along the route.

The 1.3-mile mixed-traffic line featured 15-minute headways and I recall (though can’t find the source) a local writer quip that it had a cost per mile more expensive than jet travel.

In 2008, a year after the line opened, we were writing about how to fix it. It ultimately got better with exclusive ROW in 2015, although increased service on the 40 and C buses made people less inclined to use the streetcar when buses were readily available and just as fast. 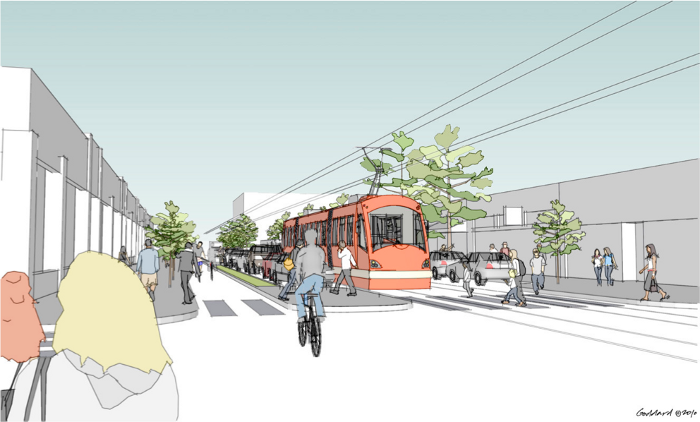 At the same time, on almost a completely separate path, Seattle had to figure out what to do with $150M in mitigation money that Sound Transit was providing in exchange for not building a First Hill station. The First Hill Streetcar was the result.

Various alignments were discussed, and the final route was approved in 2010 (we were skeptical of the final routing). There was also a multi-year delay as the custom battery and regenerative braking technology was worked out.

The Aloha extension on Capitol Hill is currently on hold following lukewarm enthusiasm from the surrounding neighborhood. Today, the FHSC plods along, serving 3,000 daily riders. The city is doing work to speed it up a bit on Broadway, but the route remains slow and circuitous, jockeying for signal priority against higher-ridership E-W bus routes.

In 2008, just a year after the SLU line opened, the council passed a massive, unfunded streetcar expansion plan, with lines running to UW, Ballard, the CD and Queen Anne.

These were heady days for the national streetcar revival movement, which was questioned by many transit advocates but hard to ignore: American downtowns were booming, and the Obama-era Department of Transportation pressing their considerable fingers on the scales by shipping barrels of money to any city that raised its hand and asked for a streetcar.

The recession and a mayoral transition slowed things down, but Mayor McGinn’s 2011 Transit Master Plan envisioned potential lines to Ballard and the University District as well as Belltown and Uptown.

At the same time, the mayor and city council put a 10-year $60 Vehicle License Fee on the 2011 ballot. It would have provided capital funding for transit improvements, although council tried to insert a proviso preventing any money from going to streetcars. It ended up being moot, as the VLF failed at the polls that year.  Streetcar expansion talk went on hold as the recession dragged on.

With two separate streetcar lines serving different parts of downtown, conversation naturally turned to how we might connect them. In 2019 the Center City Connector will open, doing just that. The CCC will run on 1st avenue, though the 2011 TMP studied a 4th/5th couplet. The federal government will pick up just under half of the $166M cost.

The CCC Could have followed in the footsteps of the other lines and run in mixed traffic with low headways. To their credit, the city opted for 5-minute headways, center platforms and exclusive lanes. It means that, of all the streetcars built in America over the last decade, the CCC will be the highest performing as transit.

While no one would ride the full system from end to end (it wouldn’t be possible, even if you wanted to), certain segments will find an audience. The straight-ish section from SLU to the ID via Pike Market and Pioneer Square serves a diverse set of residential, business, and leisure destinations. With trains every five minutes at peak on the main trunk of the route, and dedicated right-of-way, it ought to be reasonably popular. Estimates are around 25,000 riders per day, which might be optimistic.

Once the CCC is finished, it’s hard to imagine another line getting built. Light rail’s future is more certain, reducing the need for quick fixes. Local streetcar skepticism has increased, and the feds have more or less turned off the cash spigot. The deadly interplay between streetcar tracks and cyclists is problematic as well.

There’s a strong argument that streetcars are a waste of money and we ought to, in Bruce’s words, focus on keeping the buses moving while we built out grade-separated subways. In that view, it’s probably best to stop spending money on streetcars and just fight for the best ST3 alignments and exclusive bus right-of-way (ROW).

But streetcars seem to have a mystical ability to secure federal grant funding and exclusive ROW that would be otherwise unavailable to buses. To wit, the Center City Connector will have exclusive right-of-way for 25,000 riders from day one, while 3rd Avenue, which has been carrying 100,000+ bus riders every day for many years, has only partial bus priority. Politics is weird sometimes.

The best case for streetcars is that they create the political space to take right of way for transit, albeit at a high cost. Such a high cost, in fact, that paying for them generally requires supplemental funds from outside the city’s budget (i.e. the feds, Sound Transit, Paul Allen). They are like the Christmas gift that you would never buy yourself, but that’s just useful enough that you don’t it return to the store. Merry Christmas and Happy Anniversary, Seattle Streetcar!