It’s time to make Third Avenue into Seattle’s first transit mall. Tomorrow. Or, at least, late next year, once the remaining buses have to leave the downtown tunnel. The City of Seattle should ban all* non-transit motor vehicles from Third, 24/7. Banning cars completely would:

The ban has been warranted for several years, but will become far more important with the brave new world of no tunnel buses.

While Link light rail gets all the glory and gaudy annual ridership increases, Third remains the city’s busiest transit corridor in both trips per day (3,000) and ridership (likely about 125,000). Yet, as Zach reported last month, Metro, Sound Transit, and the City are not yet considering improvements to Third in the One Center City plan. Instead, they are proposing improvements to less-used corridors, along with major bus restructures that would force transfers — in some cases, with no return benefit. Improving Third by banning cars could allow Metro and Sound Transit to avoid the worst of these forced-transfer plans, while also improving the commute for a large majority of the 47 percent. (No, Mitt, not that 47 percent — the 47 percent of downtown commuters that use transit.)

The agencies should include a transit-only Third as a core piece of One Center City, and should take advantage of it by running as many buses there as it can possibly handle. More details about why, after the jump.

*With very narrow exceptions, described below.

The vast, vast majority of commuters using Third do so on a bus. During each rush hour, each of the 12 blocks of Third legally accessible to cars is serving a few cars per minute, for a total of perhaps 200 cars per block, or maybe 5000 total cars per day. Today Third alone carries well over 100,000 daily bus riders. Allowing Third to carry just one more major bus route such as the 41 or 550, with over 10,000 daily passengers each, could benefit triple or more the number of commuters who now drive cars on Third. If the City and the transit agencies are concerned about capacity through downtown, reducing congestion on Third is the most obvious possible step toward increasing it.

Banning cars would increase capacity in two ways. First, congestion from turning and stopped cars (as described below) would disappear. Second, a car ban would enable more and better-placed bus stops. With no interference from right-turning cars, a few current bus stops could be extended, and several blocks that do not currently have bus stops could host stops, increasing space for bus loading and unloading.

The highest-volume hour of the day for bus departures is 4:30 to 5:30 p.m. Today, 274 buses use Third during that hour, and the agencies believe that is the maximum possible with Third’s current configuration. An increase to 300 buses in the maximum hour could, by itself, mitigate the very worst of the forced transfers proposed for next year, while adding capacity for several thousand riders just during that single hour.

Today, Third is open to all traffic at most times. During a very narrow slice of peak hours—6 to 9 a.m., and 3 to 6:30 p.m.—cars are still permitted, but can access Third only by turning right onto it. They are then required to turn right off of Third after one block. Going straight on Third for more than one block is prohibited, as is turning left onto or off of Third. If the last few sentences confused you, you are not alone. In a one-day count I recently conducted, more than one-third of rush-hour car drivers on Third ignored at least one and often more of these rules, frequently using the street as a bypass of congested Second or a convenient way to access I-5 onramps via left turns onto University or Spring. The major ridesharing platforms’ apps for drivers also ignore the restrictions. Whether misbehaving car drivers are scofflaws or genuinely confused, their high volume makes enforcement nearly impossible even when SPD or Metro Transit Police attempt it.

A clear and consistent rule, with no cover for violations and enforced at all times, would solve this problem. Whether marked by red paint or flashing “Bus Only” signs, a permanent bus-only street would be obvious even to oblivious car drivers. Violators would stand out, and enforcement would get much easier. Ridesharing platform apps would be forced to acknowledge the ban. Portland’s transit malls, which are full-time, are observed consistently and remain clear for buses, as do other permanent and well-marked transit-only streets around the world. 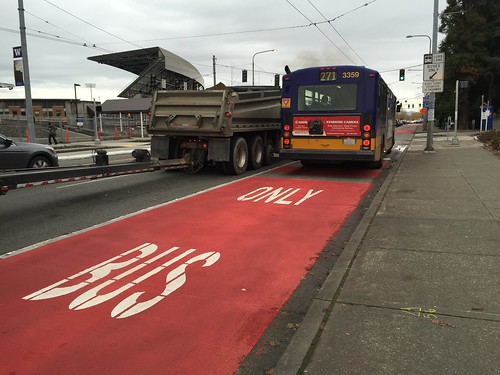 Cars Cause the Delays.

Both illegally and legally driven cars are the most consistent source of delays on Third. I have a unique perspective on Third operations: my office window has a perfect view of Third from Virginia to University Streets. For the last four years I’ve watched Third at all hours, both when it smoothly handles a staggering volume of peak capacity and when it breaks down into a static mess of diesel fumes and colorful sheetmetal. While the very worst delays typically stem from a crash or disabled bus, more routine delays are almost entirely thanks to turning cars. That includes both legal right turners, who must wait for pedestrians with buses stuck behind them, and left turners, who block what is usually the only lane available to moving buses.

Metro has gone to considerable lengths over the years to streamline its own operations on Third. Buses skip stops so they can take advantage of synchronized green lights for a few blocks. Several bus routes, including the workhorse 7, were moved to prevent any bus turns off Third along its most congested segment. But turning cars disrupt these improvements throughout peak hour, forcing buses to wait through extra light cycles as bus stops sit empty. A few turning cars, each carrying one or two people, often delay several buses with 50 or more passengers each.

Car access to Third is not essential for reaching any significant destinations. There is almost no street parking along Third, with just a few cut-out loading zones. There are no alley or parking garage entrances between Stewart and Yesler (with the sole exception of the non-public U.S. Postal Service garage between University and Union). For cars, Third is purely a shortcut on the way to somewhere else. There is no place that cars can’t reach by using First, Second, Fourth, or Fifth.

When the current rules were imposed in 2005, the City justified allowing limited car access during rush hour not because it was needed to reach destinations on Third, but because it would shorten car trips to other destinations located on east-west streets. Shortening the trips of a few thousand car drivers by a couple of blocks each is just not worth the congestion those car drivers impose on the much larger number of bus passengers using Third.

The few non-transit vehicles that truly do need Third can be accommodated. Deliveries to businesses along Third could continue to use the current loading zones, but restricted only to vehicles with commercial vehicle permits. Postal Service vehicles could access the garage by turning onto Third from University or Union Streets.

Third Avenue in its current form was built in conjunction with the tunnel, and opened fully in 1990. Bus operations were streamlined, and cars partially restricted, in 2005. It’s now 2017, and we’ve had several years of the largest boom in Seattle history adding jobs downtown and residents throughout the area. The downtown transportation system is under the most stress it’s ever seen, and more cars are the reason. Transit has been the system’s saving grace, taking on virtually all of downtown’s added commute demand. More people use transit to reach downtown than any other mode, by far. It’s time to recognize transit’s essential role and give it the priority it warrants on Third, the busiest transit corridor in the Pacific Northwest.