After a year of process in 2015 and extensive (and often heated) public participation, Metro and Sound Transit mostly bit the bullet and forged ahead with aggressive bus restructures to feed the University Link extension. Storied routes such as the 71/72/73 were deleted or shortened, the once-highest ridership line in the city (Route 48) was split into Routes 45 and 48 at UW Station, and Capitol Hill workhorse Route 43 was mostly deleted, kept alive with a handful of vestigial peak runs.

County Council members understood the theoretical benefits of restructures, but also felt the heat from their constituents, who were apoplectic that Metro would “cut” some of the best-ridden routes in the city. Most notably, Councilmember Rod Dembowski’s demanded (and won) partial restoration of Route 71 between Wedgwood, Ravenna, The Ave, and UW Station. In return for sticking their necks out to vote Yes on the restructure, the Council also required a comprehensive report on the ridership changes caused by the restructure. Though that report will be released next month, this morning Metro released the first batch of systemwide ridership data.*

Though there is a ton of data to analyze, the system trends are unmistakable and encouraging:

Neighborhood trends after the jump.

The most hotly contested by far, the NE Seattle restructure went big on a forced transfer at UW Station, dependent on a suboptimal situation at Montlake Triangle. But it appears to be working better than expected, even for routes with the furthest walk from the station via Stevens Way. The frequency boosts in NE Seattle have greatly paid off, with most north-south routes feeding the station seeing explosive growth in ridership. Route 65 (+58%), Route 67 (+200%), and Route 372 (+60%) are leading the pack. Total ridership on the former Route 48 corridor, now composed of Routes 45 and 48, is also up 8%. The major exception is the 15th Ave NE corridor, where Routes 73 and 373 saw ridership fall by 59%. It seems that most riders in the corridor have switched to Route 67, or Route 77 (+20%) during peak. 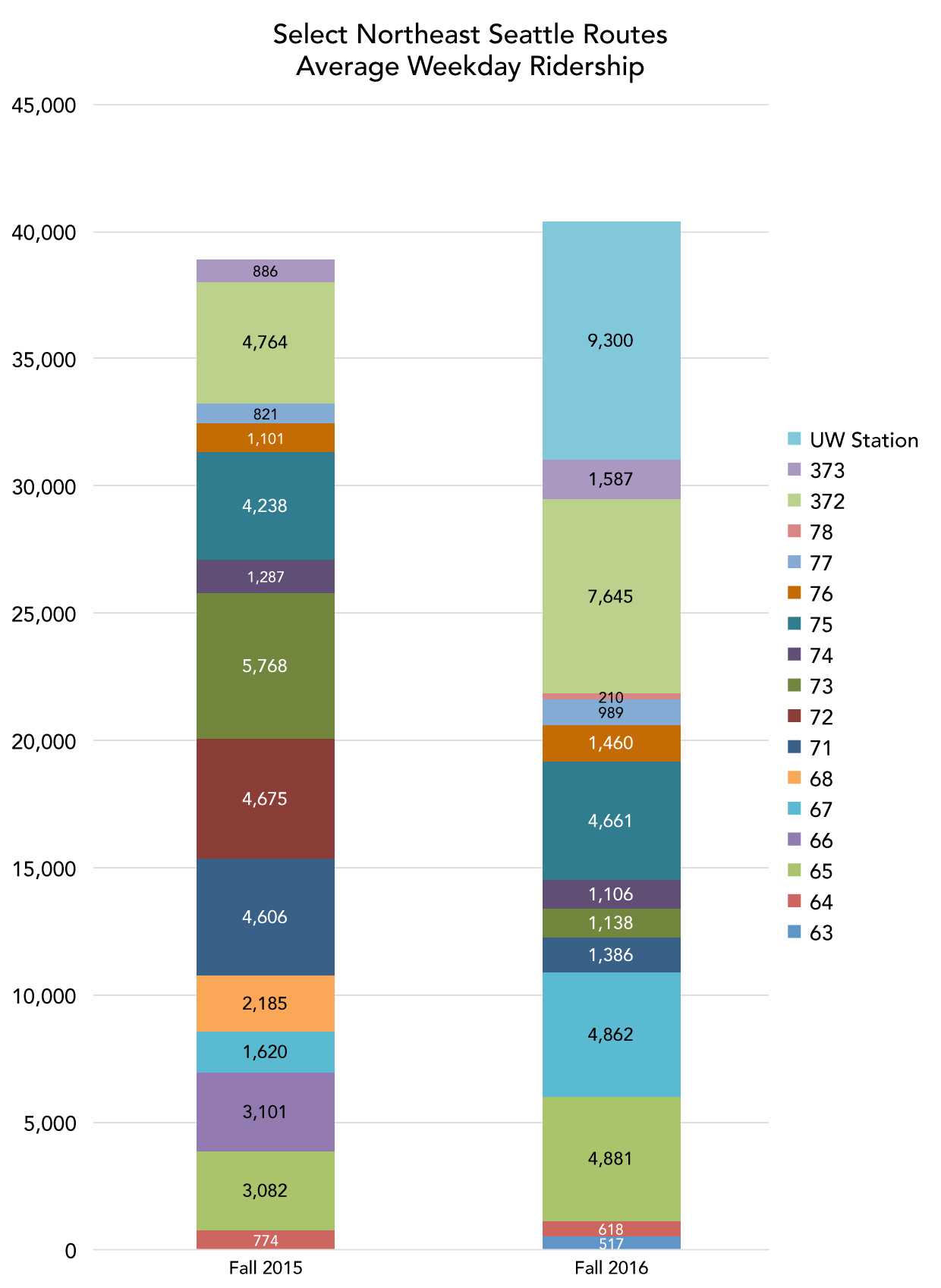 The vastly superior walkability of Capitol Hill Station also contributed to the bus ridership losses, as did the fare discrepancy between Metro and Sound Transit. Why pay $2.75 to transfer from bus to Link when you can just walk + Link for $2.25? This is especially apparent on Route 10, where ridership fell 31% from Fall 2015 to Fall 2016. The 15th Ave Business District is only 0.6 miles from the station, and it appears a good number of Hilltop residents are walking instead.

Route 11 initially picked up a ton of former Route 10 riders on E Pine Street, with ridership jumping up 40% between Spring 2015 and Spring 2016. As riders have had more time to compare bus and Link, ridership on Route 11 has fallen 16% from its peak this Spring, settling into a baseline that is still 3% higher than its pre-Link baseline. It would seem that lots of folks are walking across Cal Anderson Park rather than waiting for Route 11.

Route 49 is the exception here, with relatively flat ridership (down 6% from 6,800 to 6,400). Given the frequency boost (from 15 minutes to 12) and the replacement of the Bredas with the new trolleys, ride quality on Route 49 has significantly improved, more comfortable, less crowded, and more frequent than ever. So while the neighborhood has mostly replaced bus trips with rail trips, most riders are having a superior experience no matter their mode. 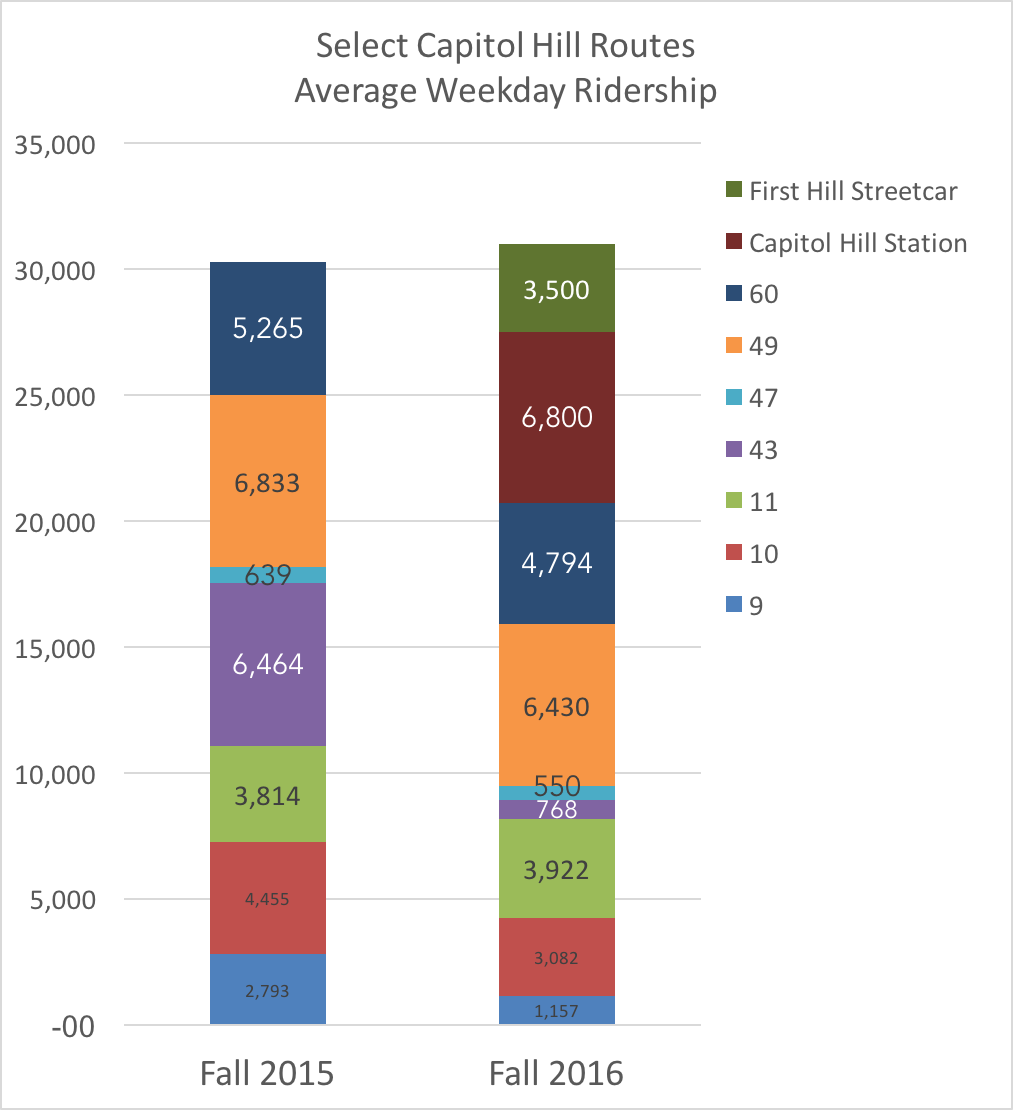 The changes to Fremont, Wallingford, and Greenwood have been a mixed bag. Routes 26 and 28 shifted from Fremont to their former peak-only variant on Aurora, providing faster trips to Downtown from East Wallingford and Carkeek Park. Route 62 provided new connections between the heart of Wallingford and Fremont. Route 40 shifted onto a new two-way transit lane on Westlake Avenue.

First, the good. The 3 primary north-south routes in NW Seattle are knocking it out of the park. Rapid Ride D (+21%), E (+8%), and Route 5 (+2%) now account for nearly 40,000 weekday rides on their own. The major cross-town pathway, Route 44 (+13%) continues to be one of the most densely ridden routes in Seattle.  And Route 62 jumped out of the gate with 7,400 weekday riders, picking up the slack on the Green Lake/Wallingford/Fremont/Dexter corridor.

One of the unfortunate consequences of the NW Seattle restructure was the further disconnection of Greenwood from Fremont, with neither Route 5 nor Route 28 serving the heart of Fremont. Ridership on both Routes 26 (-20%) and 28 (-22%) fell markedly, though Metro tells us both routes still perform remarkably well in the peak period, and continue to suffer from peak overcrowding. Off-peak, riders are likely choosing the frequency of 5/40/62/D/E over these half-hourly neighborhood routes. Local trips between Fremont/Gas Works/Latona/UW also fell by a surprisingly high amount, with Route 31 down 12% and Route 32 down 7%.

We also received stop-level data for thousands of stops in Seattle. We’ll soon be looking at specific stops at Capitol Hill and UW Station to discern any microtrends there.

*The data presented here, from Fall 2016, is accurate but partial. It reflects through the end of January 2017, rather than the end of the current service change period. Therefore, undersampling may cause final numbers to deviate somewhat from what is published here, though the general trends are accurate.  Take with a small grain of salt.

75 Replies to “The ULink Restructure Was a Bold Gamble. It Has (Mostly) Paid Off.”