More and more of us are riding transit every day. But the numbers say we also drive cars ($). 81 percent of Seattle households (including my own) still own at least one car. Many of those who don’t own cars use car sharing from time to time. Cars aren’t a sustainable solution for the majority of urban travel, but they will always be the best tool for certain trips.

Unfortunately, they’re also highly lethal, to the tune of over 40,000 deaths annually across the country—a number big enough to qualify as a leading cause of death and a major public health problem. In Seattle alone, we had 21 traffic fatalities in 2016, including 7 pedestrians and 5 cyclists killed. Nearly all of those fatalities are caused at least partly by driver inattention.

If you are a driver, you can reduce this risk! In last year’s “Driving for Urbanists” post, Zach described several ways drivers can make streets safer, most of which amount to treating other users with respect and courtesy. This time, I want to zoom in on just two aspects of respectful driving: crosswalks and lane control. Paying attention to these two things will make your driving as a whole much less threatening to vulnerable road users.

Yes, That Is A Crosswalk. Drive Accordingly.

If someone says “crosswalk,” you probably think of something marked with painted lines or zebra stripes. There are far more crosswalks than that. And you need to be prepared to yield to pedestrians at every single one. State law (RCW 46.04.160) defines a crosswalk as:

In non-lawyer English, this means that every side of every intersection is a legal crosswalk. That’s true even when:

The only exceptions are on freeways or where there is a sign or barrier specifically prohibiting pedestrians from crossing.

The intersections in this picture (crude graphics solely the author’s fault) demonstrate some of these cases vividly. All of the areas outlined in brown are legal crosswalks where you, as a driver, are required by law to yield to pedestrians. 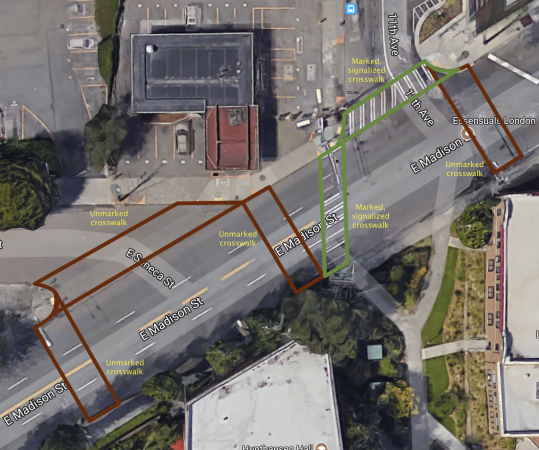 The ubiquity of unmarked crosswalks has a few implications for drivers. First, slow down. It’s impossible to scan every one of the many unmarked crosswalks if you’re driving too fast. Second, yield for pedestrians at every single intersection—especially where the idea seems crazy to you. Your legal obligation to yield doesn’t change because the intersection seems like an inappropriate place to walk. Third, if you see another car stopped ahead, look carefully before you pass to make sure the other car isn’t stopped to yield to pedestrians. State law (RCW 46.61.235(4)) prohibits drivers from passing other cars that are stopped for that reason. Finally, where you are waiting at a traffic light or stop sign, stop so your entire car is positioned behind the crosswalk, not in it—whether or not the crosswalk is marked.

You may think “Won’t I be scanning and stopping awfully often if I take these rules seriously?” Well, yes, you will. And that’s a good thing! A stop for a pedestrian costs only a few seconds of your time, and requires only a push of the brake pedal for effort. Those few seconds can save a life, and also help change the norm that car drivers are the only street users that matter.

On any stretch of street with a curve, you’ll notice that lane markings on the inside of the curve are worn off. Car drivers have a habit of cutting corners. It allows them to slow down less for the corner, while also reducing the cornering forces their bodies feel. Unfortunately, it’s also one of a group of unsafe practices that fall into the category of “not staying in lanes.”

(1) A vehicle shall be driven as nearly as practicable entirely within a single lane and shall not be moved from such lane until the driver has first ascertained that such movement can be made with safety.

In our crowded city, movement out of a lane can’t be “made with safety” without a careful check. On the right, there are likely cyclists, doors of parked cars, or, where sidewalks are missing, pedestrians. On the left, there are other vehicles, whether moving in the same or the opposite direction. And, if you leave the lane in a curve, chances are good that you can’t see any safety issues.

To the right, a crude mockup of typical corner-cutting behavior illustrates the problem. By the time our corner-cutting driver gets within visual range of the cyclist, he will have to swerve or stop to avoid hitting the cyclist. No such evasive maneuver would be necessary had the driver stayed in the lane.

Leaving the lane is also a problem in other scenarios. Cars encroaching on a bus or streetcar lane may delay transit service for large numbers of riders. Cars encroaching on bike lanes present severe safety problems for cyclists, sometimes forcing them suddenly into car traffic when drivers least expect it. Cars that turn without first moving fully into a turn lane may block other cars while waiting to turn safely. Cars leaving lanes are likely to sideswipe each other, parked cars, or fixed objects.

Fortunately, staying in lanes is not difficult, once you are aware of the importance of doing so. Be aware of where your lane is, and consciously drive within the lines. Slow down enough to avoid any need to cut corners. Move all the way into turn lanes before making turns. Signal every lane change, even when you think no other users are present, and leave enough time to glance over your shoulder before moving into the new lane. By using this extra caution, you will reduce accident risk for both yourself and road users who are in places where you aren’t supposed to be.