WSDOT’s recent study of high speed ground transportation in the Cascadia Corridor raised hopes that much faster rail connections to Vancouver and Portland may be in our future. The Governor has requested a more comprehensive study in 2018.

Depending on the technology and alignment chosen, a high-speed rail service could cover operational costs by 2035. However, capital costs may be large, with estimates ranging as high as $42 billion. Annual ridership in 2035 is just 1.9 – 2.6 million, rising to 3.1 – 4.2 million annual riders by 2055. That seems too low to warrant such a large investment unless costs can be dramatically reduced. Policy makers may conclude the more promising path is to pursue incremental upgrades.

The study examined high-speed rail and maglev technologies with maximum operating speeds of at least 250 mph. The hyperloop is briefly reviewed, but that technology is too speculative for useful cost estimates. After screening, three conceptual north-south corridors were studied in most detail, all serving the Portland, Seattle, and Vancouver markets. Corridor 1A serves seven stations with a combination of urban core and periphery stations. Corridor 2 serves only the urban cores and Portland Airport. Corridor 4 is a lower cost option serving just three suburban stations. The latter option reduces costs somewhat, but also reduces ridership because the slower local rail connections to business districts increase total travel time for many users. 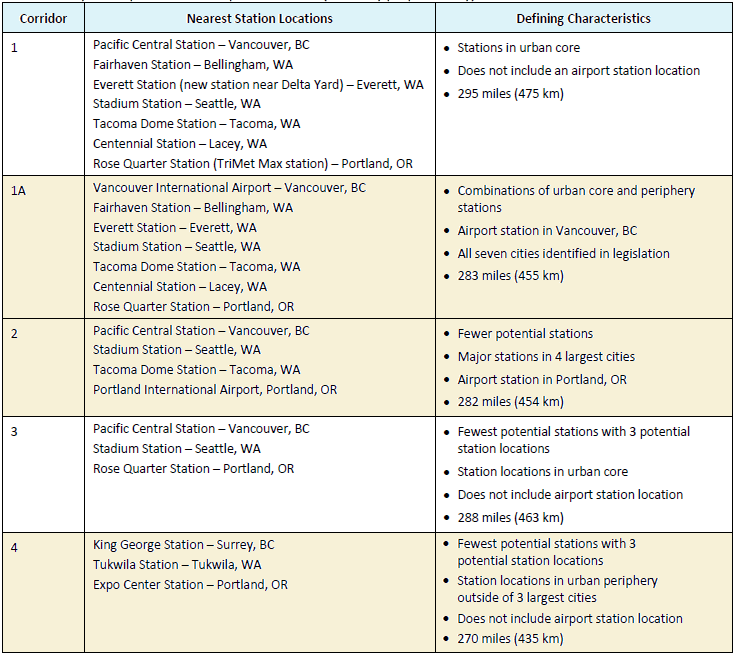 The study uses the FRA CONNECT model to develop cost and ridership estimates. The model isn’t sensitive enough to measure short trips (say between Everett and Seattle in the 1A corridor) or to closely consider station locations, but outputs estimates for travel between major centers.

Two connecting corridors were examined. An east-west service to Spokane with 90mph service would not significantly boost ridership on the core corridor, but could serve 300,000 – 400,000 annual riders by 2035 while requiring permanent operating subsidies. Analysis of a connection from Portland to California’s HSR in Sacramento is incomplete, but is expected to show very low ridership and revenue potential because of the sparsely populated areas between. The mountainous terrain implies very high capital costs.

Capital costs are estimated between $24 and $42 billion. The wide range is driven by uncertainty about the amount of tunneling. The upper bound estimates are similar for each technology. But HSR has more favorable lower bound estimates because it’s easier to reduce the degree of tunneling and follow a lower cost alignment.

The service is modeled with about 12 trains per day, the level that maximizes operating cost recovery in 2035 before diminishing marginal ridership sets in.

Half of the expected ridership is on Seattle-Portland trips. Another fourth is Seattle-Vancouver, with all other possible trip pairs accounting for the balance.

Why Such Low Ridership?

WSDOT’s 2006 master plan for Amtrak Cascades anticipated ridership increasing on the corridor to 3 million per year by 2023. Meeting that goal would have required $6.5 billion in total investments in 2006 dollars ($7.8 billion in current dollars) and average operating speeds of 110 mph. Actual investment levels have been much lower, with most having come via $800 million in ARRA funds since 2009. Nevertheless, it’s been enough to raise ridership from 225,000 in 1993 to 683,000 in 2006 to 817,000 in 2016. Some of the improved frequency and travel times benefits of ARRA investments are still in the pipeline. Current farebox recovery is 59%.

Estimates in this study are not comparable to those in the master plan because they were developed more than a decade apart with different models. But they certainly suggest few benefits from going beyond a program of gradual improvements. Maybe there just aren’t that many more riders to be gained with much higher speeds above 110mph?

The recent study estimates between 13% and 17% of travelers might use a high-speed train in the corridor in either 2035 or 2055. The maximum segment load (how full the trains are at the busiest point in the network) is just 27-33% in 2035. If the east-west corridor is added to feed the primary north-south corridor, maximum loads might be as high as 37%. The study authors cite 75% maximum loads on efficient systems. Even the 12 trains a day that maximize operating cost recovery would have a lot of empty seats.

A system that achieves respectable mode shares without serving enough riders to be efficient can only be serving travel markets that are too small. The study notes prominently that the cities are quite economically disconnected despite their proximity. Seattle and Vancouver have very few linkages, with only a few companies operating in both cities and fewer having a significant presence in both. LinkedIn data suggests few personal connections, with Vancouver members more connected to members from San Francisco, and Seattle members having more connections in Atlanta than Vancouver.

To contrast, California’s HSR system faces an expected capital cost of $68 billion, roughly twice the midpoint of Cascadia HSR/Maglev estimates. But that capital cost would be supported by 15 times more riders. The median ridership forecast is for 37 million annual riders on the California system by 2029.

This study did not model alternatives with lower speeds and less capital cost. The next iteration of the study should benchmark HSR against services similar to the 110mph master plan for comparability.