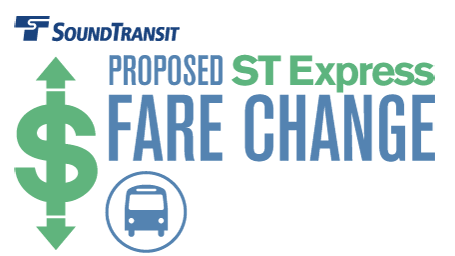 Both options would institute flat reduced fares ($1.50 for low-income and youth riders and $1 for Regional Reduced Fare Permit holders), getting rid of the de facto county line surcharge for each of these payer categories. This is the first low-income fare reduction on any transit service, anywhere in the country, beyond the low-income fare set at implementation of a low-income fare category.

Option 1 would institute a $3.25 regular adult flat fare, splitting the difference between the current $2.75 single-county fare and the $3.75 multi-county fare.

Both adult fare options would help fund the elimination of the county-crossing surcharges for reduced-fare riders. The new fares would take effect this coming June, along with Metro’s $2.75 flat fare, and Community Transit’s new route-based fares.

The Community Transit Board has not set the route-based fares, but has established a policy of having a single fare for each payer category for each route. The CT Board is expected to set the specific fares in March.

Option 2 for the ST Express fares has the weirdness of charging a different fare on routes serving the same express trip. Route 577 would charge $2.75 while route 578 would charge $3.75, even though most of the ridership on these two routes is travelling between Seattle and Federal Way, and very few passengers on route 578 cross the county line.

To make Option 2 more sensible, base the bus routes charging the higher fare on express distance (how far the route travels without a stop).

This may not go over well with riders on route 577/578, but if they want to keep their local fares, they should be prepared to drop their expectation that everyone gets a seat.

Have a higher cash fare, set to the next-higher dollar amount, which would be $3 for the shorter distance BRTish routes and $4 for the longer-distance premium express routes. The $3/$4 cash fares would help fund the discount-fare reductions, discourage cash payment at the bus door, and reduce the impact of change fumbling among those still paying with cash. Indeed, this could turn out to be the most popular part of the fare restructure for those using ORCA. (ST Express does not accept mobile payment.)

Sound Transit is not a money tree

Some have suggested simply dropping all the fares to $2.75, and letting Sound Transit find another revenue stream to make up the difference, even though they know the state legislature and federal administration have also had the same philosophy for reducing car tabs and paying for tollways.

I agree that charging $3.25 to ride from Seattle to Bellevue is probably too much, but I don’t see how lowering the regular fares on specialty long-distance commuter routes serves a purpose, especially when Community Transit is charging $4.25 for nearly-identical trips.

A public hearing will be held on the fare proposals on Thursday, February 1 at noon at Union Station. In addition to taking the online survey, you can email comments to fares@soundtransit.org, call in comments to 1-866-940-4387, or snail mail comments to