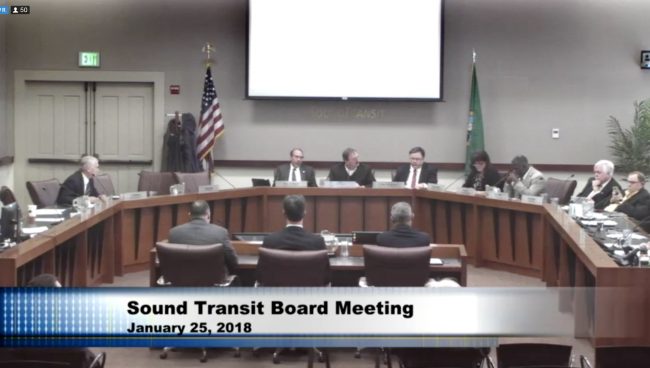 State Senator Steve O’Ban (R-Tacoma) continued his pursuit of a directly-elected Sound Transit Board, grilling lobbyists defending the transit agency’s current governance during a public hearing on Senate Bill 6301 Wednesday. But now that a Democrat chairs the Senate Transportation Committee, it’s not likely the bill will even get a vote in that committee.

A similar bill, SB 5001, passed the Republican-led Senate in 2017, but the House Transportation Committee didn’t act on the legislation.

Sen. Steve Hobbs (D-Lake Stevens), who chairs the Senate Transportation Committee, said he didn’t see the bill going anywhere. The public testimony did not convince him a directly-elected board was needed.

Currently, the 18-member Sound Transit Board is comprised of 17 locally-elected officials appointed by each county executive and subject to approval by the county council. The State’s Transportation Secretary also sits on the board but is a non-voting member. Ten of the board members must be from King County, four from Pierce County and three from Snohomish County.

SB 6301 would replace the current board with 11 members elected from single-member districts, with the first election held this November. To draw the lines for the 11 districts, the governor would appoint five members, who represent all five sub-areas, to a districting commission.

Districts would be required to have nearly identical populations and precincts couldn’t be divided. Any registered voter who had resided in that district for at least 30 days before the election would be eligible to run for the seat. Elected board members would be barred from holding any other public office. The State’s transportation secretary would remain as a non-voting member.

O’Ban said the bill was founded on a basic democratic principle: “If you are going to tax individuals, the taxing authority should be directly elected.”

“Given the open-ended authority that Sound Transit has,” O’Ban said during the Senate Transportation Committee meeting Wednesday, “at a minimum we would want them to be responsible to those they are taxing, to those they represent by a direct vote.”

In a letter to the Senate Transportation Committee, Dave Somers, ST Board Chair and Snohomish County Executive, wrote the bill “creates the opportunity for special interests to have undue influence.”

“The current structure of the Sound Transit Board is an asset to the people of the region. Local leaders are the eyes and ears of their communities. The perspectives and relationships gained from their local communities help in selecting the appropriate courses of action for the agency, including our paths for securing critical permits,” he wrote.

Somers added the bill would increase the cost to taxpayers, estimating each directly-elected board member would receive $10,000 in annual compensation.