If you have been down to Angle Lake Station lately, you may have noticed signs attached to the ORCA readers announcing a new bus route: King County Metro Route 635, the Des Moines Community Shuttle.

26th/24th features the Des Moines Creek Business Park, which opened in 2016, and includes office buildings for AmerisourceBergen, Greencore, Partners Crackers, XPO Logistics, and the new Federal Aviation Administration regional headquarters. The office park is expected to have roughly 2500 on-site employees, including 1600 at the FAA, per King County spokesperson Scott Gutierrez.

It will also feature a dial-a-ride zone for off-street service, where feasible, within the Wesley Homes senior living community, with pick-ups and drop-offs booked at least two hours in advance. Some of them had permanent stops on the pre-2012 version of routes 131 and 132, at which there rarely was anyone boarding or alighting, so the dial-a-ride process is a happy medium. 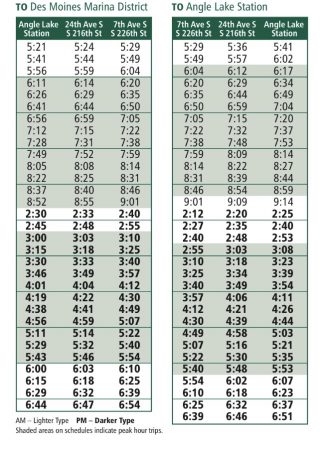 For now, going out to lunch at the restaurant row on Marine View Dr. will mean catching the infrequent route 156, and walking a bit, or by other mode.

More information is available in the route’s brochure

Per Gutierrez, the route is largely in response to a community survey Metro did last year as part of its Community Connections program. It is funded in part through a partnership with the City of Des Moines.

Route 635 is the first Dial-A-Ride Transit route to connect to a light rail station. It is also only the second bus route to connect to Angle Lake Station (with the other being the A Line). Sound Transit Express route 574 was proposed, to be re-routed to serve the station, but that proposal got tabled.

A launch ceremony will take place at 10:30 Tuesday morning, at Angle Lake Station.