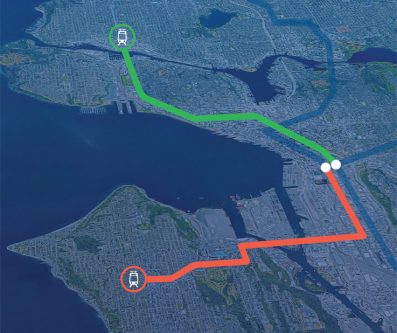 This week Sound Transit is kicking off ST3 planning for the Ballard and West Seattle Link extensions with community meetings in West Seattle, Ballard, and Downtown Seattle. The basic alignments have been chosen, but there are still a lot of big decisions to be made before Sound Transit selects the preferred alignment for each segment.

The difference between a good system and a great system is all about making the right choices at this phase. Here is what Seattle Subway is focused on:

When building out a multi-billion dollar system, the worst thing we can do is make planning decisions that damage people’s trust in the system.  A great system gets you from point A to point B in about the same amount of time, every time.  It gives the system a huge advantage over unreliable and frustrating traffic.

Two features in the draft plan jump out as a cause for concern:

ST3 is a fantastic expansion of our regional system, but will not be the end of rail expansion in Seattle.  As the Seattle Transit Blog Editorial Board wrote last week, ST3 must be built for the future.  Light rail lines must be designed so that future expansion can happen without high cost re-work or disruptions in service.

There are four areas where Sound Transit needs to explicitly future-proof the system:

A system is only as good as people’s ability to get to it.  Therefore station location and design needs to consider bus integration.  Mt. Baker and Husky Stadium stations show us what happens when too many compromises are made on rider experience. Pedestrian access and bike storage facilities are non-negotiable features, to to be designed at every station with safety and security in mind.

We’ll be following the planning process closely and we’ll be back when there are opportunities to influence the decisions that can help make the system exceptional.  In the end, it’s your system: it should be designed to be awesome for you.

Seattle Subway is organizing a community of grassroots transit supporters to channel public enthusiasm for fast, reliable high capacity transit into actionable goals. We champion a vision of a connected city and region to accelerate our region’s transit investments. You can find a list of board members here.

67 Replies to “An Opportunity to Make Light Rail Exceptional”