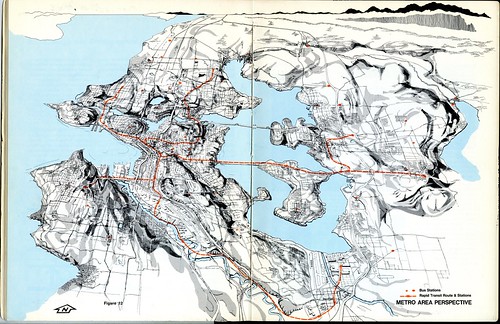 Fifty years ago this week, February 13, 1968, 50.8% of Greater Seattle voters voted yes to the Forward Thrust rapid transit proposition. The construction of a 49-mile rapid transit system modeled after BART and the Washington Metro needed voters to approve $385 million in general obligation bonds. The remainder of the $1.15 billion cost would be picked up by the federal government. Unfortunately, the state constitution requires a 60% majority to approve such a bond so the measure failed and the rest is history.

But for the sake of this post, let’s assume it did pass and the system got built as planned. What would a Metro map look like? We’ve seen the scans of maps from the plans. What we’ve not seen is how the service would have operated. Here is a diagram I made that presents the Seattle Metro rapid transit system as if it were in operation in 1990, five years after completion of the initial system plan after several phased openings than began in 1976. I wanted to create a map with a 1970s design aesthetic but not clone the style of those iconic transit maps of the era.

The plan outlines the physical route segments, named after the area they served but did not develop operating lines. There is enough information in the plan and its technical appendix that I can infer three primary rail lines. Note that the lines and their names are my creation.

The plan, for cost estimating purposes, assumed trains would operate 20 hours a day, 5 am to 1 am, every day, with closing time extended by an hour on Friday and Saturday nights. Hourly owl buses would connect all stations when rail service is closed.

The base daytime frequency on each line would be every 5-7.5 minutes. Rush hour frequency increases to every 4-5 minutes, meaning the core downtown segment between Jackson and Pine would see trains consisting of 6 or 8 cars arriving every 90 seconds. In the early morning and late evening periods frequency drops to every 10 minutes and the Eastgate Line does not operate.

Each rail car would be about 70 feet long and 10 feet wide with 3 doors on each side and wide aisles and seats for 74 passengers. Cars would be coupled in pairs to form trains of 2, 4, 6, or 8 cars. The trains would be electrically powered through a third rail and be capable of reaching a top speed of 75 mph. This is comparable to BART and Washington DC Metro rolling stock and train lengths.

The bus lines included on the map are:

I have changed some station names from their original plan names. The Boeing associated name of Plant II is changed to South Park for the bridge near it. University Hospital is changed to Pacific. Rainier changed to Judkins Park. Wedgewood is corrected to Wedgwood. Northrup Way is corrected to Northup Way. A provisional Wilburton station in the recommended East route and future Tukwila station on the South route was included.

For reference, I have produced a Google map of all the routes and stations in the plan with their projected opening dates.