Last Thursday, Sound Transit staff gave a presentation to the Board’s Operations & Administration Committee in response to the March 16 breakdown of two down escalators on the same level at UW Station, resulting in long queues to enter the station during the evening peak period.

On March 16, one escalator was broken down for over two hours before ST personnel became aware it had stopped. Once the other broke down, staff miscommunication delayed calling the contractor that maintains the escalators — KONE — to come out and repair the escalators. Then, KONE took two and a half hours to get a repair crew to the station, despite being under contract to respond within one hour. 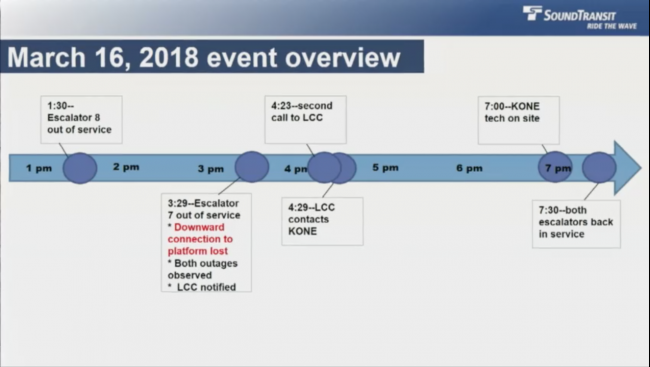 ST’s Operations Department has already implemented staff protocol changes to make sure vertical conveyances are checked more regularly by station security personnel, and that any problems with escalators be reported immediately to the maintenance contractor before on-site ST staff attempt to re-start the escalator.

Staff are looking at allowing the usage of stopped escalators as stairs, but only when all escalators in one direction are broken and with staff on hand to assist.  Use of the emergency stairwells is also being examined. A report will be delivered at the next board meeting on April 20.

Additionally, the agency is looking at overall increases to reliability and has been upgrading components to the escalators to help reduce break downs. Some ideas under consideration include replacing some escalators entirely with stairs as well as making the emergency exits available for full-time use.

Per an email from ST spokesperson Kimberly Reason, ST does not actually allow walking on moving escalators, considering the practice “disruptive”, but has not chosen to expend resources policing the behavior.

One protocol change implemented months ago was a reduction in reversing elevator directions, which seems to have reduced breakdown rates.

For the long run, new stations will have new standards:

While UW Station may get more stairs, no plans are in the works yet to retrofit SeaTac Airport, Tukwila International Boulevard, and Mt. Baker Stations with redundant elevators.