On its way to producing a single “preferred alternative” in early 2019, Sound Transit is in a year-plus process of collecting public input and screening a number of variants on the Seattle “representative alignment” voters saw before the 2016 vote. These “Level 1” alternatives are getting some basic, qualitative analysis across a wide series of metrics (below). The Stakeholder Advisory Group is reviewing these alternatives and will make its recommendations on April 24th. An Elected Leadership Group will consider this and make its own recommendations, and in May the Sound Transit Board will move a subset of these alternatives forward for further technical analysis and public comment. 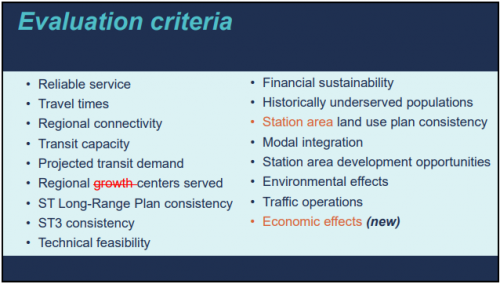 In West Seattle, the representative alignment is elevated tracks from Sodo to the Alaska Junction, with two stops at Delridge and Avalon. These three stations intersect the three main north/south corridors in West Seattle, each with frequent transit service. 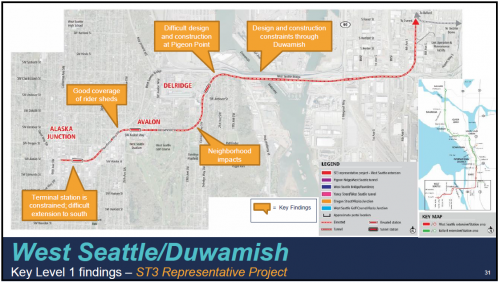 Public comment and further analysis spawned five alternatives. If you stare at it a while, the map below actually makes them pretty clear:

It’s self-evident how these alignments try to address different concerns, like:

Notably, all of these alternatives increase the cost except the light blue line that eliminates Avalon to tunnel to the Junction. As one might imagine, this also serves fewer riders and moves the stations further away from relevant activity centers. Briefly:

I suspect that most STB readers will care very much about long-term transit outcomes, and may have mixed feelings about whether elevated track is such an eyesore or not. From this perspective, it’s pretty straightforward to conclude that Oregon Street/Alaska Junction (gold) or Pigeon Ridge/West Seattle Tunnel (purple) provide the most useful train for future residents. The purple line has fewer turns and the best placement of Delridge Station*, but with a substantial increase in project risk. The summary slide (below) also hints that the purple line is way more expensive, requiring “3rd party funding”. The Yellow line moves Alaska Junction to the West, increasing the line’s walkshed. Without numbers, and an understanding of what other important projects might trade off here, it’s hard to make a final judgment between the two. 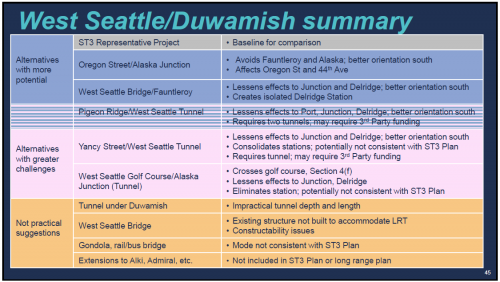 * by being further South, the purple Delridge station is closer to more people and keeps buses out of the mess around the West Seattle bridge.