Yesterday we discussed the first cut of alternatives for light rail to West Seattle.  Today we’ll focus on Ballard and Interbay at the opposite end of the line.  The general route is a familiar one, dating back to Forward Thrust in 1968, showing up again in the Monorail vote in 1997, briefly making an appearance in the 2013 Sound Transit studies and emerging in 2012 as the RapidRide D line, the second-busiest route in Metro’s system with over 14,000 daily riders.  While there have been many arguments about the merits of connecting Ballard via UW (arguments which almost certainly will be rehashed in the comments section below), regional and city planners have long preferred the downtown connection via Interbay and 15th Avenue W.

This route, however, presents no shortage of challenges.  Though 15th Ave is wide and flat, there are conflicts with Magnolia bridges, BNSF rail tracks, a golf course, and, of course, the ship canal crossing.  The route that appeared on the 2016 ballot looks like this: 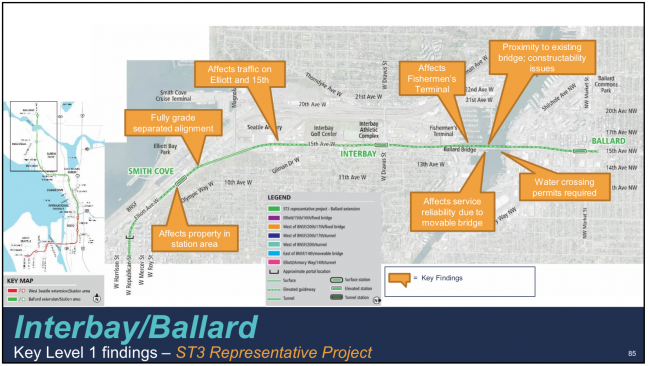 After community input, there are 6 alternatives under consideration. 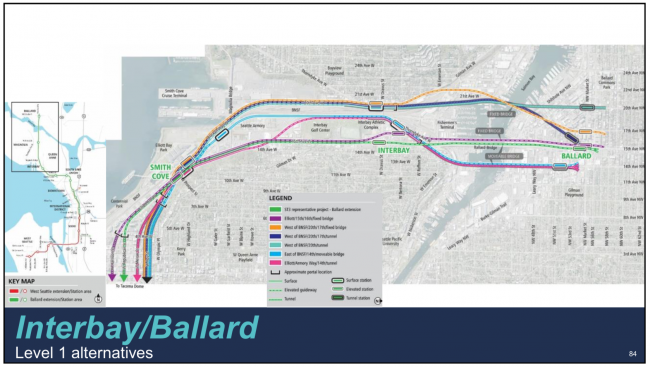 A few tradeoffs are at play in these alternatives:

Emerging from a tunnel near Kinnear Park, all options would stop at Smith Cove.  In addition to serving the future Expedia headquarters, Metro envisions using Smith Cove station as a major bus transfer point.  From Smith Cove, there are three broad routing options: the first stays as far west as possible, travelling along the wide, flat 20th Avenue W on an elevated guideway (a route made easier if the Magnolia Bridge is removed), to a stop at 20th & Dravus St.  A second option threads the narrow buffer between the rail yard and the golf course, a less populated area, to a station in the industrial area around 17th & Bertona.  The final route option stays on 15th Avenue in an elevated guideway.

Heading north from Dravus we get to the most contentious questions.  The first of these is how to cross the ship canal.  A high fixed bridge would have to be 160 feet or so to allow maritime traffic to pass underneath.  A movable bridge could have a lower profile, but the trains may have to stop a few times per day for boat traffic.  A tunnel has the least amount of disruption but also may end up costing more.  ST cautions that tunnel options “may require 3rd party funding.”

Once we’ve crossed the canal, we have a few options.  20th & Market is the westernmost and closest to the historic core of Ballard.  15th & Market is the most direct coming from the bridge and is our baseline assumption.  17th & Market gets you a bit closer to old Ballard, while another option at 14th Ave NW & NW 51st St puts you in an out-of-the-way industrial area that would be easiest to construct but poorly situated from a walkshed perspective. 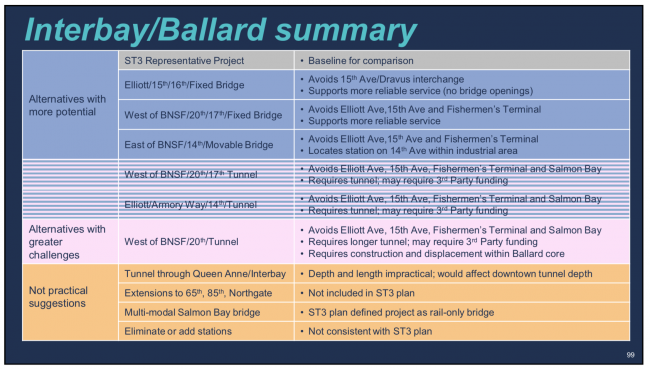 Assuming money for a tunnel magically materializes, West of BNSF/20th/17th/Tunnel (dark blue) gets the high score. In addition to good ridership, it scores highest in ST’s scorecard by being pragmatic about future expansion and construction impacts. West of BNSF/20th/Tunnel (turquoise) probably snags the most riders in Ballard proper, but bus transfers would be less direct.

Assuming no tunnel funding, West of BNSF/20th/17th/Fixed Bridge (gold) mitigates the most commercial impacts while still providing good station locations.  If I were a betting man, I’d say that’s the most likely unless money is tight or people freak out about an elevated train crossing over the south end of Ballard Ave, in which case we’ll probably end up with Elliot/15th/16th/Fixed Bridge (purple).  The relative merits of an Interbay station at 15th vs 20th depend greatly on how Seattle updates the zoning code in the Station area.  There is plenty of multifamily on 20th, but it drops off to single-family zoning pretty quickly.

The more detailed analysis will come in the next round, where we’ll see exactly what kind of construction impacts we’re looking at and how much people really value a station at 15th & Market.