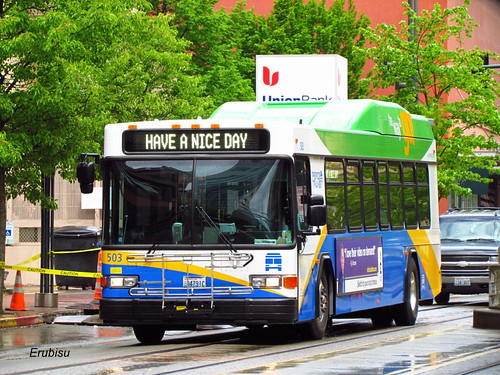 While many cities nationwide are seeing declines in bus ridership, a few transit agencies – including ours here in Seattle – are bucking the trend by restructuring their routes to focus on frequency and span-of-service, beyond just 1-seat rush hour rides into downtown. With a major restructure on the books for a year now, you can add Pierce Transit to that trend.

PT, was one of the agencies hardest hit by the Great Recession, has been climbing out of a hole.  A broad restructure (the first in the system’s 40 year history), which brought a sensible grid network and increased frequency to the Tacoma-area bus network, was proposed in the fall of 2016 and went into effect in the spring of 2017.  With a restructured network and 59,000 additional service hours, PT announced this week that ridership is up 3.8% in 2018 versus the same (pre-restructure) first quarter of 2017.

“The restructures around northside, eastside, and Lakewood routes trimmed redundancy, eliminated some inefficiencies, and overall are resulting in more direct service for where passengers want to go,” Peter Stackpole, PT’s Service Planning Assistant Manager, told me via e-mail.  While the increased service hours no doubt helped ridership, it was the mixture of more hours and a better network that put ridership over the top, he told me.

As an example, Stackpole pointed at Route 42, which saw huge ridership gains not only on weekdays (where service was increased) but also on weekends (where it wasn’t). As the network as a whole gets more useful, it draws in more riders, which is exactly what you’d expect.