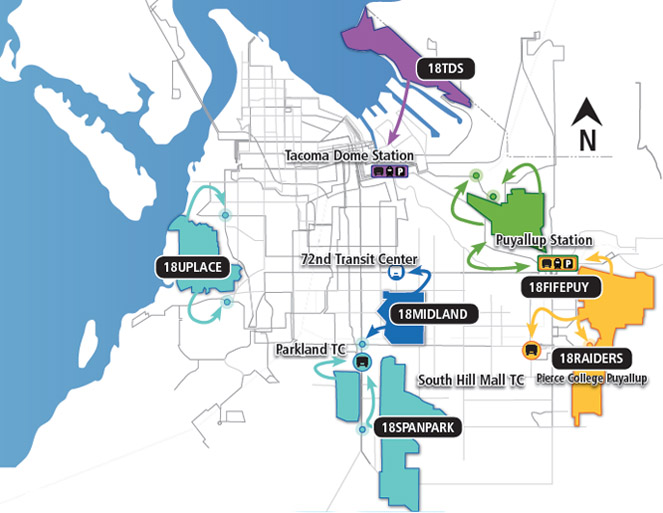 Beginning Monday, potential riders in some areas of Pierce County will have the option of a free Lyft ride to or from a nearby transit hub. The Federal Transit Administration is providing the $205,000 for this one-year pilot. From the press release:

The Limited Access Connection project’s goals include addressing mobility challenges for those with limited or no access to transit; finding solutions for the growing problem of at-capacity Park & Rides; reducing road congestion by getting more people on transit; guaranteeing a ride home for those traveling outside regular bus service hours; and meeting the transportation needs of more remote riders. These objectives are unique in that they are focused on helping connect people to/from transit.

The concept is pretty simple. If you’re in one of the shaded areas, you can request a Lyft ride with a special promo code, as long as your destination is one of the designated transit stops. Similarly, you can travel from one of those hubs to one of the areas. Riders are limited to a total of 48 free rides per month.

Regrettably, the rules get a bit more complicated than that. 4 of the promo codes apply seven days a week, while 2 others (18RAIDERS and 18FIFEPUY) are weekday only. The hours are different for each: most cover the bulk of the day, but 18RAIDERS is only from 8:30-10:30pm when bus service to the campus stops.

Creative ways to solve last-mile problems are great, and spending $205,000 on this sure beats building 2 or 3 park and ride spaces. I doubt that having this service be entirely free is sustainable, but one hopes it’s successful enough for PT to find some way to keep it going.

Whether or not things pencil out in 2018, this is probably the future of exurban and rural transit. Assuming that automated cars are ultimately workable, it’s hard to see why transit agencies would continue to operate traditional buses on low-volume coverage routes, even as the major trunk lines will still require large vehicles. Whether those vehicles are best actually owned and maintained by the agency or a contractor is an open question. This and the 10 other pilots nationwide may help to answer it.

Wheelchair-accessible vehicles are available by phone, though not through the Lyft app. Smartphone-less riders can also use the phone or a webpage.