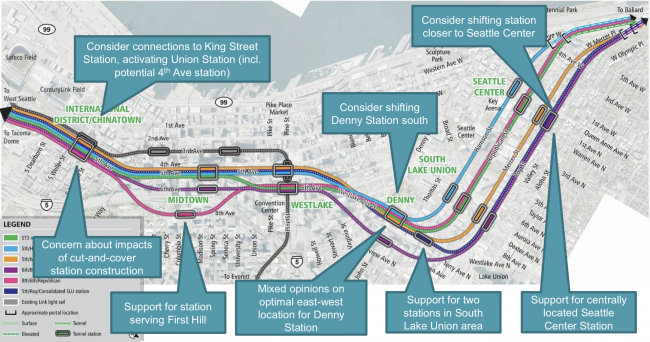 Last Thursday, the Sound Transit 3 “Elected Leadership Group,” a supergroup of local elected officials (the Infinity War of transit oversight, if you will), met to consider which of Sound Transit’s Level 1 alternatives should advance to Level 2.  The ELG’s recommendations, like those of the nonelected “Stakeholder Advisory Group,” are nonbinding.  The final decision will be left to the ST Board (which includes several ELG members).

The meeting centered on the SAG’s Level 1 feedback with regards to West Seattle, SODO, Downtown, and Ballard, but the most contentious discussion involved whether to move forward with analysis of an 8th & Madison station on First Hill.  Seattle Councilmember Sally Bagshaw and King County Councilmember Joe McDermott both expressed interest in serving the First Hill neighborhood, noting it has the highest residential density and lowest car ownership in the city (and probably the state?). However, the deeper First Hill station would, according to staff, present construction challenges (including two I-5 crossings).

More controversial, however, is whether moving the station to First Hill would qualify as a bait-and-switch in the eyes of the voters (cost and ridership would matter as well). Sound Transit’s general council, Desmond Brown, testified that the question is whether a voter could look at the station and agree that it was what they voted for.  On the one hand it’s just a couple of blocks (from 5th to 8th Avenue), but it would mean moving the station to a different urban village, which could be seen as a material difference.

Brown’s testimony seems to contradict what we heard from the agency back in 2016, when they implied that the station location was flexible.  Spokesperson Geoff Patrick reiterated to us this week that “nothing has changed in terms of the legal parameters,” adding that “the discussion in question was on a specific alternative.”  In theory, it seems, a station at 8th Avenue that had similar cost and ridership numbers could probably have survived the bait-and-switch test.  But in reality, given the geography, any actual station East of I-5 would have failed to meet those criteria.  Whether the increased costs would have provided increased benefits is seemingly immaterial.

Getting an actual legal ruling on the matter would mean taking the agency to court.  That’s unlikely to happen, though, since the officials who serve on the ST board, like Seattle Councilmember Rob Johnson and Snohomish Executive Dave Somers, want to drop the First Hill alternative entirely. ST CEO Rogoff, for his part, seemed concerned that one departure from the plan could lead to more elsewhere in the system, which could jeopardize the entire effort.

So, spooked by construction challenges and the potential legal questions, the ELG decided to just bail on the neighborhood altogether. That’s really too bad.  Future generations will scratch their heads about this decision, and our transit system will be poorer for it.

With regards to the rest of the analysis, the ELG largely decided to carry forward the SAG’s recommendations with two exceptions: they eliminated one redundant Ballard option, but opted to carry forward an additional West Seattle alternative that removes an entire station at Avalon to tunnel under the junction.  Interestingly, concerns about a bait-and-switch didn’t come up.

The board will decide in July which alternatives to move forward to Level 2, where we’ll see more accurate cost and ridership numbers.