Our final installment in the ST3 Level 1 alternatives commentary takes us through SODO. The industrial area south of downtown is notable in our series in that it is currently served by light rail, which runs along the E-3 busway between 4th and 6th avenues.

The new alignment, like the current one, would have a station at S Royal Brougham Way and another at S Lander St. Sodo is also where the N-S “spine” from Everett to Tacoma is split in two. A new line would be constructed in parallel, allowing for West Seattle trains to connect to the existing downtown Metro tunnel while trains coming north from the Rainier Valley (and eventually Tacoma) are re-routed into a new tunnel to continue on to South Lake Union and Ballard. 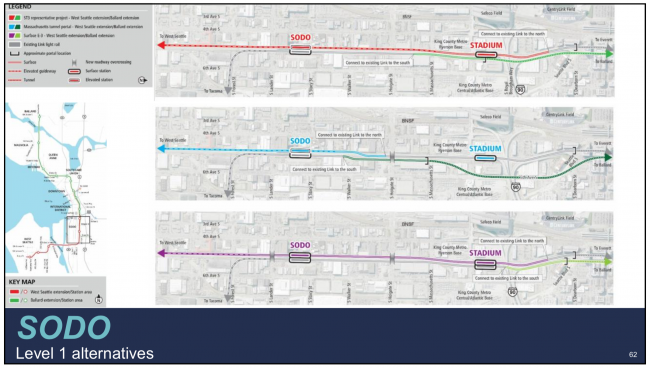 All three alternatives under consideration run in parallel to the current tracks. Some of the relevant issues include:

Overall, the exercise seems to be about connecting West Seattle and Downtown with as little impact as possible.

What’s notable is what’s absent: any discussion of using an alternate N-S right-of-way, such as 1st Ave S. A 1st Ave S alignment would better serve the emerging nightlife and office space on 1st Ave, not to mention Safeco’s front door. Perhaps it was thrown out for technical difficulties or objections from the Port, but it’s unfortunate it wasn’t even considered as a Level 1 alternative.

Anyway, we have three alignments under consideration:

Both new alternatives are superior on almost all measures to the baselines, so I would imagine both will survive to Level 2, where we’ll find out just how bad those soils are and just what impact we’re talking about with respect to the bus base, onramps, and the INS building. It sure seems like Surface E-3 is the favorite, though, outscoring the baseline on 9 criteria and losing in none. Add in the possibility of permanently closing Royal Brougham to cars and car/bike/ped bridges on Lander and Holgate, all while keeping Stadium Station open to both trains, and it’s probably the winner.