Last week we described the latest concepts for light rail in West Seattle and Ballard. Today, we’ll talk about the path through greater Downtown, from Lower Queen Anne to Chinatown. In a deviation from the follow-the-monorail theme of other segments, the representative alignment skirts the edges of Belltown to provide a direct line to South Lake Union.

It’s all going to be tunnel, so there are only four questions to ask: 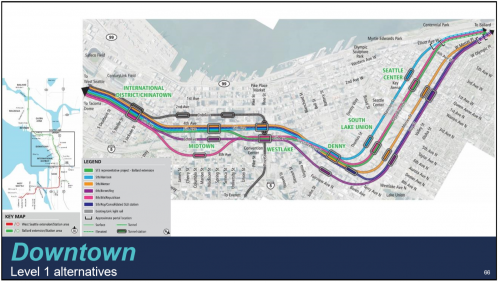 Interestingly, using the evaluation criteria, all of the alternatives score worse or no better than the original alignment on every metric, except that (surprise) consolidating the SLU stations into one makes things cheaper and easier.

Using the evaluations in the study, it is clear that the best alternative for future riders is 6th/Boren/Roy (purple). It has the best station spacing in SLU and avoids the sewer and foundation problems. However, it’s a longer tunnel and thus more expensive. If ST cuts corners, 5th/Roy/Consolidated SLU Station (dark blue) saves money by making things way worse.

Moving Midtown Station to serve First Hill has been a pet project of mine, and I have to say am utterly unconvinced by the findings here. The study doesn’t even consider a station further up the hill, which would directly serve the key employment centers and housing density. Moreover, the study doesn’t look at ridership (!),  but “projected transit demand.” This is a clever slight-of-hand to count the density downtown that is already served by the DSTT. It is a criterion designed to obscure the key value of a First Hill deviation, which is to extend the system’s walkshed. We estimated the additional tunnel length of an 8th Avenue station as 0.09 miles, longer in a strict sense but essentially the same in the scale of this project.

Finally, the evaluation makes a big deal of the fact that an 8th Avenue station is “not consistent with ST3.” Given the variants elsewhere in the study, this characterization of a 3-block shift is astounding. In the broader context where Sound Transit screwed the neighborhood out of a voter-approved station in ST1, this assertion is astonishingly tone-deaf.