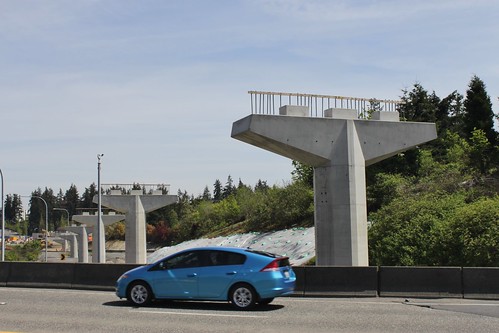 Early Tuesday morning, a construction foreman for Kiewit-Hoffman was killed after falling 30 to 40 feet from a column on the East Link guideway, near the 148th Avenue interchange on State Route 520 in Overlake. The accident, only the second fatal incident at a Sound Transit construction site, triggered a one-day halt in girder work on the Overlake segment and an investigation by the Department of Labor and Industries according to KOMO.

The Times reports ($) that there are 100 workers involved in the Overlake segment of the East Link project and they will be given time to mourn before returning to work and being interviewed by investigators. In statements to KING 5, Kiewit and Sound Transit sent condolences to the worker’s family and friends and their shared commitment to a safe work environment for employees and the public.

We at STB would also like to express our condolences to the worker’s family and friends and express our gratitude towards those who are helping build out our regional transit system.