Update: Erica Barnett at The C is for Crank has a rundown of what Councilmember Sawant’s proposed ordinance would do (putting severe restrictions on a lot more property than the Showbox) and rapid timeline for approval.

The movement to save the Showbox has grown quickly, and attracted some wanting an opportunity to proverbially punch a developer in the face, or to stop more housing from being built, for which the Showbox has provided a convenient excuse. 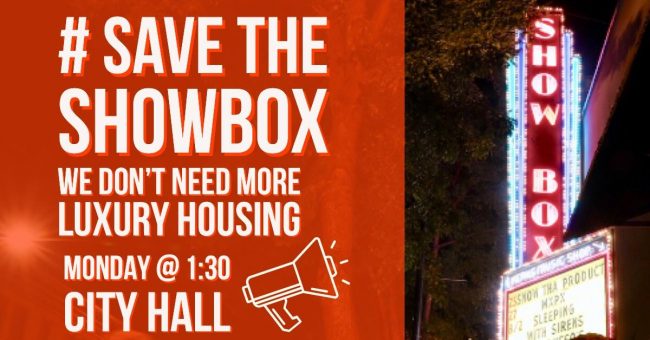 There is no actual item related to the Showbox on today’s 2:00 City Council Agenda yet. There are, however, ordinances proposed by Councilmember Mike O’Brien on the introductions calendar to get all for-profit employers with over 20 employees in the City to offer pre-tax commuter benefits beyond car-cost reimbursements, and to provide guiding principles on reorganizing the Move Seattle Levy package.

The Showbox is a victim, not of crass developer capitalism, but of our failure to recognize the housing supply problem before it became a crisis. Josh Feit has a lot more to say on the topic, over at The C Is For Crank. I would just add that having a performance space of similar quality to the Showbox can happen on-site, most likely on the top floor. Lift the height limit in exchange for building such a performance space, and more income-limited units. Then, everyone should be happy except the historic preservationists, housing opponents, and height opponents.