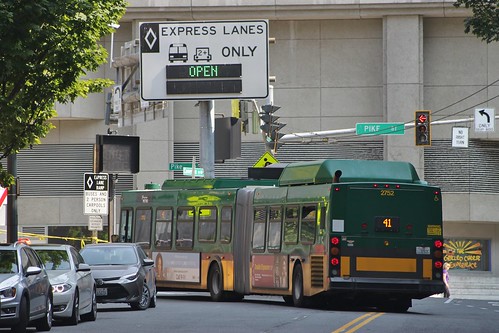 Seattle has been successful in redefining urban mobility, but our recipe for success doesn’t have to be unique. Like any good cook who starts with the fundamentals of a solid recipe, then adjusts the ingredients to fit different tastes and dietary needs, each city can adapt elements of successful mobility strategies to best meet their own needs.

Over the past few years Seattle’s recipe to redefine urban mobility has include investment in transit service, adoption of TNCs (Lyft and Uber), growing the car share market, and experimenting with bike share – all of this while Seattle experienced the highest increase in transit ridership of any major city in the US. We are growing the mobility ‘pie’ with more choices to get around than ever before.

Here are a few of the ingredients to consider:

Embrace the transit system: Cities should embrace their transit systems as if they were their own, even if they’re not. It doesn’t mean running the buses and trains. Cities are better served to leave that to our partners at the transit agencies. It means actually caring deeply about the success of the transit system. It means recognizing the buses run on city-controlled streets and cities alone have the authority to prioritize transit over other traffic. It means finding the choke points and dedicating lanes to transit and giving buses a little early jump at key intersections. It can mean small but operationally important changes like bringing the transit stop out to the bus so the bus can stop in-lane and avoid the merge back into traffic. We shouldn’t expect people to stop driving and take the bus if it is stuck in the same traffic as cars. If a city is losing transit riders they should try making the buses faster and more reliable. Embrace the system!

Invest in transit service: Seattle is fortunate to have generous voters who recognize the inherent value in a robust transit system. Today about 50 percent of commuters take transit to work, but just under 70 percent of Seattle voters supported our last transit ballot measure. This means both users and non-users see value in the transit system; car drivers can benefit from transit’s success too.

But here’s the nut: Seattle’s ridership increases did not happen by accident. The City is now investing more than $40 million per year in added bus service, which has resulted in a system where close to 70 percent of households are within a 10-minute walk of a bus that comes every 10 minutes or better. This is a major increase compared to just 25 percent of households in 2015.

A city doesn’t need this magnitude of investment to make a difference. Cities can work with their transit partners to redesign the system around fewer corridors with more frequent service, adding value with a near revenue-neutral first step. It is working for Columbus and Houston while Philadelphia, New York, Los Angeles and many others are just getting started. But cities should find a way to invest. Making an investment demonstrates improving the transit system is a priority. Ridership will follow.

Recognize the role of private employers: Seattle is able to achieve a 75 percent non-SOV commute mode split downtown with the help of large and small employers. Their collective investment of close to $100 million per year in transit incentives for employees makes taking the bus or train free (or nearly free) for thousands of workers every day. When transit is convenient and essentially free, it is an easy choice. These transit users become a strong constituency for more service, which leads to support for the service investment mentioned above. My friends at Commute Seattle coined this “Seattle’s Virtuous Cycle.”

Experiment to help shape new modes: Last year the Seattle Department of Transportation (SDOT) published the New Mobility Playbook to articulate the department’s principles and approach to embracing new mobility options. The Playbook serves as a clear signal to private mobility providers that Seattle wants to work with them, and it clearly defines the rules of engagement and priorities, such as put people first.

Free-floating car share began here in 2012 under a pilot permit (today nearly one-fifth of the population is an active member of one or more car share service). In 2014 Seattle was one of the first large cities to legalize Lyft and Uber. And last year Seattle pioneered free-floating bike share with an experimental pilot permit. More than 1.5 million bike share trips later SDOT is building on early success to expand the program by doubling the number of bikes. In fact 75 percent of bike share users reported using bike share to access transit.

SDOT is also eyeing autonomous vehicles (AV). Publicly available shared AV trips will likely be here next year, so we need to be ready to shape this new service for the better.

These modes complement transit. Seattle and other cities can continue to welcome new forms of mobility, such as shared electric scooters and other forms of micro-mobility to shape their role in our urban mobility system. More travel options is better!

Don’t skimp on the partnerships: Partnerships are what make urban mobility work, starting with a strong partnership between the city and transit agency. A partnership so strong the partners find themselves up in each other’s business on a regular basis is a good sign. “Coopetition” is a desired outcome if it means the city and agency are trying to push the envelope…together. It also means the city and agency support each other because they are working from a common strategy. SDOT and King County Metro are committed to partnership and work at it every day, but also know there is room for improvement. Cities and agencies should admit they need each other, and that’s a good thing.

Next, find and nurture advocates. Cities won’t always agree with advocates on the ‘how’ or the ‘what’, but they can’t do this without them. Each community inevitably has your own version of  Transportation Choices Coalition and Cascade Bicycle Club. And don’t forget local bloggers such as the Seattle Transit Blog. Every city needs a voice to keep it honest, push for more, help clear the proverbial transit path and celebrate successes.

Seattle is still a work in progress. As we continue to grow at a record rate, we are redefining urban mobility, but still have a long way to go. We depend on the personal car for too many trips and our progress toward creating safe streets is too slow. We will be tweaking our recipe for years to come. Cities should look to Seattle’s ingredients and others to make their own urban mobility recipe of success.

Andrew Glass Hastings is the Director of Transit & Mobility at SDOT. This piece represents his personal opinions.

44 Replies to “Urban Mobility in Seattle: A recipe for success any city can make their own”