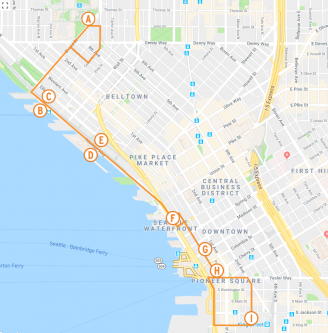 The Downtown Seattle Association is running a two-month “Waterfront Shuttle,” starting August 1st and running through October 1. It is free to ride and serves the stops shown on the map.

It is clearly aimed at tourists, although this month is a little late to start serving that market. It runs from 10am to 8pm, seven days a week, and hits many of the obvious tourist spots. The literature suggests people use the shuttle to access waterfront businesses after parking elsewhere downtown.

The money comes from WSDOT, as mitigation for their endless project on the waterfront. This year’s operation is a pilot to develop service concepts for future service should a long-term funding source arise. WSDOT’s mess will continue through 2019, so if the pilot is promising we may see another year of it. The DSA contracted with MTR Western to operate the buses.

The stated headway is “approximately” every 25 minutes, with no attempt to match any printed schedule. However, the end-to-end trip time is (at best) also 25 minutes. As 3 to 4 22-seat vehicles simultaneously serve the route at different times of day, the headways are often quite a bit shorter than 25 minutes. Although there are no real-time arrival information signs or data feeds, today DSA deploys “concierges” at major stops to communicate with buses on the radio.

When I first read about this service concept, I was skeptical that a 25-minute headway on a short-haul line would attract many riders. The DSA says that a total of 4,957 riders used the shuttle in the first two weeks, and (anecdotally) in peak hours these shuttles are sometimes standing-room-only. 35 riders per hour isn’t bad for new service with some of the limitations above; it would be great to see what a properly provisioned bus line could do.