This is the third and final post in our series about the latest designs for the West Seattle and Ballard Link extensions. This post covers West Seattle.

More detailed information, including Sound Transit’s score of each station site and track segment, can be found here. Sound Transit’s new outreach website has visualizations and other information. Here’s where you can read Part One (Ballard) and Part Two (Downtown & SLU).

Since the Level 1 analysis, ST eliminated the Delridge station options that were well off of Delridge Way, leaving only alignments that continue west on Genesee Street. Nearly all alignments that point west at Alaska Junction are also gone, as they mesh poorly with vague future plans to continue to White Center (the west-pointing ST3 representative project remains). The majority of surviving options tunnel under the Junction.  All have a potential ridership of between 10,000 and 12,500 within the station walksheds.

Staff continue to make it clear that a tunnel will add costs.  The three tunnel options here increase the overall project costs by anywhere from $500M to $1.2B, in addition to creating increased schedule risk. If a tunnel were to be selected, supplemental funding from the City would be required.

The Pigeon Hill alignment seems likely to be eliminated. It would be the most complicated feat of engineering, and therefore the most expensive option at $1.2B more than the representative project; the river crossing would be the widest, and the tunnel would have to be a deep bore through the hill. ST staff seemed lukewarm about the alignment.

The alignment north of the bridge would be the easiest and cheapest to build, but it would require disruptions of port operations to construct.

The middle alignment would require minimal trouble to the port, but it would require siting construction on the edge of the Duwamish Greenbelt, which would disturb the area’s biome.

Sound Transit eliminated a station above Delridge Way due in part to Port conflicts, and seems likely to remove the Pigeon Ridge station, which would be elevated above SW Genesee Street.

That leaves  three contenders. One would be on the corner of SW Genesee and Delridge Way; another other would diagonally straddle 25th Avenue SW, and the representative project on Delridge Way SW north of Andover.

The guideway over 25th would be lower and fit better into the existing neighborhood, but it would limit TOD potential more than the corner alignment.

The station straddling both sides of Fauntleroy Way near Avalon Way has two elevated options and one tunnel option.

If neighborhood concerns carry the day, and additional funding is secured, a tunnel is likely at the west edge of West Seattle. ST’s presentation indicated that neighborhood residents had raised objections to elevated stations at Avalon and the Junction.

Residents who participated in the design charrette are concerned about “station height and bulk, compatibility with neighborhood;” the slide about the Junction says the neighborhood has “concern about effects to neighborhood character if elevated” in the description of one station concept.

In any case, one Avalon station concept would be elevated to the west of 35th Ave SW. The other would straddle Fauntleroy, either as a cut and cover tunnel or an elevated station.

Community feedback was most enthusiastic about the 41st/42nd tunnel alignment; the presentation notes that the station is the “most compatible with neighborhood character” and features “great urban design potential, excellent transit integration and non-motorized access, and considerable TOD potential.”

The 44th Ave SW elevated station includes negatives such as “neighborhood character” and likely “permanent effects to business parking,” and the Fauntleroy tunnel is written up skeptically; it’s the farthest from the Junction itself, but it is in a walkshed ripe for upzoning. 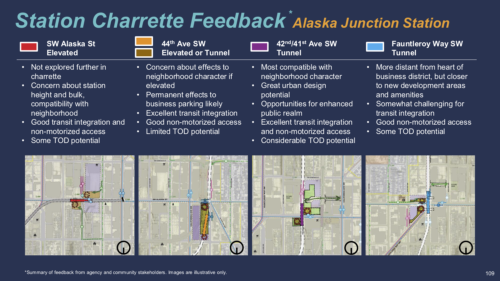 Taken as a whole, the current plans for the Link system are impressive. Sound Transit has organized a commendably thorough community outreach program and used it to draw up an exciting system.

The stations with the most variance and highest ridership—the Junction, Chinatown, and Ballard—all have the potential for controversy and conflict. The stakeholder process is half done, but the last half might be the most important part.

This post has been updated in places to clarify that the “ST3 representative project” is one of the five remaining alternatives.