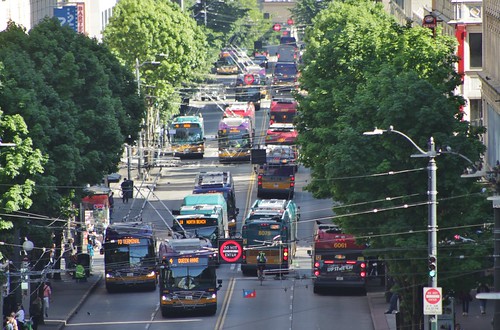 A coalition of transit advocates and organizations in the city is coming together around a combined set of priorities to make the most of the city’s limited right-of-way.

STB is excited to join Move all Seattle Sustainably in advocating for safer, more multimodal streets.  This includes more dedicated transit lanes, better pedestrian experiences, and safer bike infrastructure.  Here is an excerpt from the coalition’s letter to Mayor Durkan and the Council:

As Seattle grows, and especially as we approach the period of maximum constraint, we must aggressively shift our transportation investments to the modes that move the most people with the lowest carbon impact and in the least amount of space. The city’s budget and timelines for funded projects must emphasize guaranteeing right-of-way for people walking, biking, and riding transit. This means speeding up timelines for painting dedicated bus lanes and creating protected bike lanes. It also means protecting pedestrians in intersections and putting them first; adaptive signals are failing and, as NACTO recommends, are only appropriate for suburban settings.

Read the whole letter here, or read more from The Urbanist, CHS, and Curbed Seattle.

42 Replies to “Seattle Needs to Think Differently about Transportation”