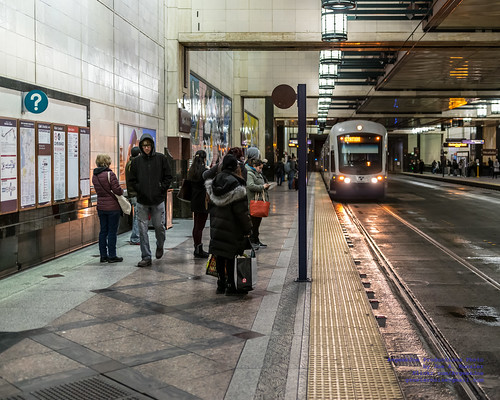 Commenter “Alex” offered the following tip for finding out when 2-car and 3-car Link trains are coming:

“Actually, if you check the vehicle identifier at the front of the train, if the number is 1 through 40, it’s a 3-car consist. 41 and above are 2-car “trippers.” Do note that once the 3-cars begin to cycle out after the weekday evening peak, these numbers no longer are clear indicators. The vehicle id is also accessible in OneBusAway.”

On weekends and during the weekday mid-day period from 9 am to 3 pm, all Link trains are 3-car consists.

I have been giving the advice to wait near the third car, which is pretty dependably the one with the most available space, during peak hours and on weekday evenings. The rest of the time, board the third car.

ST spokesperson Kimberly Reason had this response to Alex’s tip:

– However, this information isn’t fool-proof. During service disruptions, it is not uncommon for Operations to renumber trains to get the system back on schedule. Often when this happens, 3-car and 2-car trains can be assigned a train number.

– Also, train length doesn’t determine dwell times. Dwell times are set at an industry standard of 20 seconds, and signals are set in synchrony to this standard. Even when trains load faster than 20 seconds, dwell time remains constant.

Given that dwell time is often significantly longer than 20 seconds, the tip may still help out, and every little bit of time savings will help during Carpocalypse, even if Carpocalypse itself degrades the utility of the tip.

If you are able to access OneBusAway from your platform, please be so kind as to let Link passengers know what length of train is coming, and migrate accordingly.

Alex’s tip is consistent with having thirteen 3-car trains running all day, and one LRV totaled. The most trains that can run at 6-minute headway, with 48-minute travel time each way, and no more than 11 minutes layover at either end (since only two trains can be in a station at a time) is nineteen trains.

Assume all six peak-only trains are 2-car trains. If “seat slides” (in which operators drive a different train back than the one they drove to the station, after taking a break) were to be enacted at one end, so that only one train maximum is laying over at that station, then those two LRVs from the unused trainset would enable two other peak trains to become 3-car trainsets. Do the same at the other end, and the peak fleet in service would consist of 17 trains, all 3-car trainsets. In other words, from a certain perspective, the presence of 2-car trainsets in the peak rotation could be seen as a result of policy priorities more than lack of available vehicles.

A word about seat slides: Link operators do seat slides when they take over a train already in service, stopping briefly by the maintenance base. Most of you have been on one of those trains at least once, if not many times, so you know they happen. The policy question is then not one of whether seat slides are allowed, but whether they are allowed at Angle Lake Station and UW Station.

54 Replies to “How to Predict 2-Car Link Trains Coming”