Engrossed Substitute House Bill 1793, having been revived last week and passed out of the House, now faces a showdown in the Senate Transportation Committee, where it must be heard and voted out Wednesday morning. At time of publication, the bills to be heard at the meeting were not publicly listed yet.

The bill allows camera enforcement of bus lanes, HOV lanes, crosswalks, ferry lanes, emergency vehicle access, and blocking the box, with tickets being mailed instead of handed to drivers while blocking traffic. 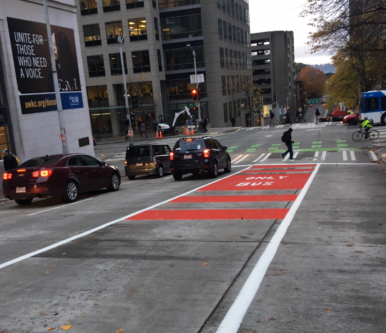 During the sausage-making process, the bill has been reduced to the downtown Seattle area only, and only for a pilot program expiring at the end of 2021, with only warnings being mailed in 2019. Starting in 2020, the first offense will still get a warning. Also, the state gets half the action on the profit from the ticketing.

The bill requires signage to be placed 30 days before camera enforcement starts, but still has no requirement for clear pavement markings, such as red paint.

The Legislature adjourns sine die Sunday, April 28 (which happens to fall on Orthodox / Coptic Easter this year, so expect Saturday to be it for the regular session).