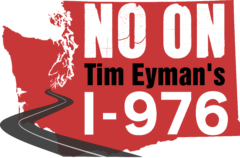 As expected, the State Legislature declined to pass Tim Eyman’s $30 flat car tab initiative, so it is headed to the November ballot.

Check out the full list of cuts at the No on I-976 campaign website, as well as Permanent Defense’s campaign flyer. Sound Transit would suffer a revenue loss of about 12%, threatening many of the projects just approved in 2016. Transit agencies across the state would lose an important source of funding. Most notably, this would cripple Seattle’s Transportation Benefit District, which funds an increment of bus service within the city. Finally, Amtrak Cascades draws much of its funding from license fees. I-976 is a setback for all attempts to give people an alternative to sitting in traffic and polluting the air.

Vote for more transit. Vote No on Initiative 976.

The editorial board currently consists of Martin Duke, Frank Chiachiere, and Brent White.