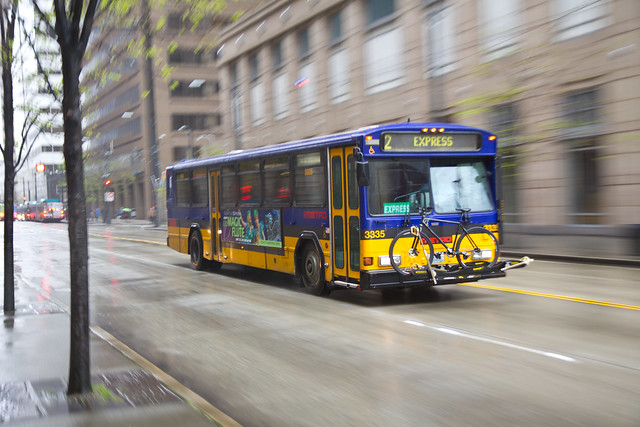 King County Metro has some challenging times ahead. The COVID-19 pandemic is likely to lead to a recession, one which is forecast to be as bad or worse than the great recession of 2008. Funding from the CARES act can help offset losses in the short term, but Metro will almost certainly have to reduce service at some point.

Given these circumstances, it may be helpful to look back at last time Metro looked at implementing service cuts. Metro’s cuts were going to be implemented in four phases from 2014 to 2015, but only the first phase ended up being necessary. Seattle Transit Blog covered these reductions extensively with an overview, as well as detailed analyses of changes in Seattle/North King County and the Eastside. Though most of these reductions did not get implemented, they include a dramatic restructure of bus service (rather than a simple reduction of service across the board) throughout the county. With a reduction of bus service levels on the horizon again, it’s a good time to look back on some of these restructures and see which ones may come back, and what should be changed this time around.

There’s not a ton to say here since this area was already overhauled in the 2016 U-Link restructure, and will be restructured again next year for Northgate Link. But one theme of this restructure that will be quite relevant next year when Northgate Link opens is the consolidation of north/south service onto one corridor, and the normalization of transfers to connecting east/west service. In 2015, most north-south service was going to be consolidated into a new route 73 (which would have consolidated routes 66/71/72/73 to downtown and route 67 to U-District). In 2021, Link to Northgate can do all the heavy lifting, with a shorter local route to pick up the stops between stations.

Unfortunately, the current Northgate restructure proposal includes a lot of duplicative service on both parallel north/south and east/west corridors, as well as some L-shaped routes that barely count as frequent. I’ve always thought it would be a good idea to consolidate these routes so that, while most people would have to transfer to get to their destination, they could count on both routes to be not just frequent, but very frequent. With the threat of service reductions looming over the restructure proposal, such consolidation may be necessary to preserve frequent service at all.

For Magnolia, which has relatively low ridership and is in a geographically challenging area to serve, Metro proposed only two routes at peak: a 24 (that resembles today’s 19), and a 33 with a large loop that covers East Magnolia. Off-peak, that 33 would have a spur to West Magnolia in addition to the loop. Try as Metro might, there is just no good way to serve all of Magnolia effectively with one route.

This time around, I think they at least should keep both the 24 and 33 all day. This is a neighborhood where the proposed 24 loop seems to make a lot of sense to run all day (certainly more than today’s “snake-shaped” route 24). But the 33 loop should be smaller (only as far north as West Manor Place), and both routes should continue to overlap to provide frequent service to Expedia.

Additionally, Metro proposed eliminating the 31 and consolidating service around the 32. But with Queen Anne service (mostly) consolidated to serve SPU (creating a good transfer point for Queen Anne), and with the fact that the 32 doesn’t quite go downtown (requiring many riders to transfer), it may make more sense to consolidate service around a modified route 31 to Discovery Park (in place of the 33). The route could enter Magnolia via Dravus to facilitate transfers to the D-Line. If made frequent, this route could demonstrate how requiring passengers to transfer could allow frequent service to be expanded to more parts of the city, ultimately improving rider experience.

This is another area that faced a dramatic change in service patterns. Broadly, Metro was trying to reduce all-day direct service to downtown Seattle from four routes (C-Line, 21, 120, and 125) to two core frequent routes (C-Line and 120). This seems laudable, as four all-day routes to downtown (3 of them frequent) is very expensive. However, replacing the 21 with the infrequent route 50 (and not providing any overlapping service to boost frequency) makes for a terrible rider experience. Moving the 50 would create a neat crosstown route, but bus service on 35th Ave should be supplemented with another route. Though overlapping the new 50 on 35th Ave, this other route could start and end in areas that would otherwise expect to lose all-day service (such as the northern part of today’s 128 and southern part of today’s 22).

One other change that would ease the transfer experience would be to move route 120 (soon to be the RapidRide H-Line) to exit Spokane Street onto SW Avalon Way, like the C-Line does, and then move back to Delridge via SW Genesee Street. While doing so would add a few minutes of delay to the 120, it would create a pair of stops that are served by both the C-Line and 120. If timed correctly, combined daytime headways from these stops to downtown would be 7-8 minutes on Sundays, and 6 minutes on weekdays. And during peak, riders could catch any one of up to 23 buses per hour downtown from this stop (assuming they don’t already have a peak downtown express, most of which would be preserved). Simply put, if done well, Metro can easily bring West Seattle down to two all-day routes to downtown without making it a miserable experience for riders who have to transfer.