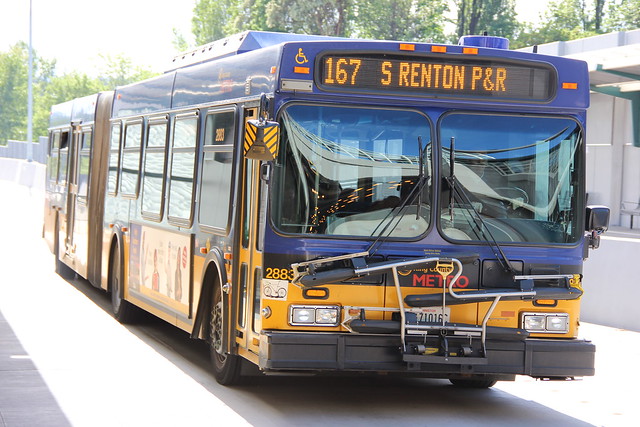 Due to a dramatic ridership decline as a result of COVID-19, Metro has reduced bus service to match ridership demand. But with revenues cratering, yesterday it announced a permanent 15% service cut compared to pre-pandemic levels for its September service change. This includes a 50% drop in Seattle-funded service, allowing it to continue to the following March service change even though the Transportation Benefit District (TBD) expires in December.

The restored network will “focus primarily on a network of all-day routes throughout King County, including preserving frequent service on Metro’s busiest routes, while restoring peak service sufficient to meet returning demand to the extent possible given the current financial challenges.” Beyond mid-day service, Metro continues: “While some weekday peak-period commuter routes will be restored, many peak routes will remain suspended in anticipation that long-term commuter ridership demand will take time to recover as many large employers continue having employees telework. Night, evening, and weekend service also will be significantly reduced.”

The theme of these cuts resembles the service reductions part of Metro’s proposed “Triplett Plan” of last recession and Community Transit’s suspension of Sunday service, more than Metro’s proposed 2014/15 service reductions. The difference is that the reductions proposed for September, rather than being somewhat uniform in nature, focus specifically on excess peak service. This is in line with the collapse of peak ridership due to COVID-19, a trend that will likely continue in some form for years after the sudden normalization of telework, and fears of spreading COVID-19 persist. Metro plans on slowly restoring some suspended service as revenues pick back up.

The changes are broken down by routes fully operating, routes with reduced service, and routes that are fully suspended until revenue recovers. Metro also separately calls out routes affected by the Renton-Kent-Auburn Mobility Project, which was largely planned ahead of COVID-19, and replaces many bus routes in the area with a new, more efficient network of routes. Below are the list of routes in each category, with peak-only routes shown in bold:

Routes deleted due to the Renton-Kent-Auburn Mobility Plan (mostly replaced by other service):

Ahead of the September 2020 service change, Metro will restore some suspended service on June 22. Metro has not specified what these restorations will be, except that they will make adjustments based on ridership and community feedback, and that most peak-oriented commuter service will remain suspended.