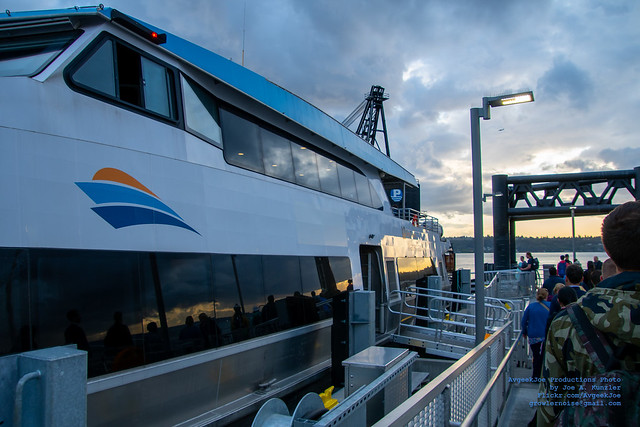 SDOT’s plan for replacing 4,800 cars per hour that used the West Seattle Bridge at peak includes 950 more people per hour using waterborne transit. Once Covid has receded to the point that most people are returning to work, how feasible is this?

The draft SDOT framework requires “options to increase capacity for waterborne transit.” The regular West Seattle Water Taxi boat (Doc Maynard) holds 270 passengers. It generally takes 35-40 minutes to do a round trip, meaning the best case capacity is about 400 people per hour in one direction.

Back in 2019, water taxi ridership was about 2,500 per weekday. We don’t have per-trip data, but we can estimate that about 200 people were on each peak-direction trip, or roughly 300 per hour. So under pre-pandemic conditions the existing boat can only accept another 100 riders per hour.

It’s possible that cutting some corners could get the service up to 2 round trips per hour, providing another 140 spaces. This might involve not accepting passengers in the contrapeak direction to reduce time spent boarding and deboarding.

The framework says that “SDOT identified a list of potential vessels for expanded waterborne access and dock options on the West Seattle peninsula and along the Downtown Seattle waterfront. SDOT identified numerous vessels (private and publicly owned) that can carry between 50 and 400 people. Additionally, potential docks were identified on the West Seattle peninsula and Downtown Seattle sides that could accommodate new water taxi service.” Even a few of these boats, given sufficient docking points, could easily achieve another 850 riders per hour in capacity.

But are there riders?

Regardless of boat capacity, the biggest question here is actually identifying riders who aren’t already covered by other competitive rides to downtown and then figuring out how to get them to the dock. The West Seattle dock at Seacrest Park is a pain to access under normal conditions. Tthe existing shuttle mini-buses (773, 775) and their meandering loop routes are insufficient to handle an order-of-magnitude increase in ridership, and are an unreliable means of catching a boat. In any case, many parts of West Seattle already have a faster bus option. Harbor and Alki Avenues are in no shape to handle thousands of new drop-off trips. All else held equal, the Venn diagram of peak-time riders who are willing first to do the work to get to the waterfront and then deal with the crossing and for whom the Water Taxi would represent a materially-improved transit outcome during the bridge closure seems to have a pretty narrow intersection. In short, the current ridership isn’t where it is for no reason: the Water Taxi is a premium service (at premium fare) that provides service between a very specific set of destinations, but doesn’t obviously provide a premium travel time for most trips.

The existing terminal has neither an immediately accessible residential area nor a massive center of employment. Seacrest Park is just that — it’s a park. There are only a very limited number of residences along Harbor and Alki Avenues, and access to surrounding low-density residential neighborhoods is tough at best. The built environment over at Pier 50 isn’t helpful either: it’s a steep uphill climb from the terminal to the employment core. It’s also a massive construction zone at the moment, with major work ongoing at the State Ferry side of Colman Dock. Put more plainly, the potential catchment areas of the two terminals is pretty small, and it requires a pretty specific trip pair to find people willing to switch. Perhaps new routes can create new possibilities.

To sum this all up, the Water Taxi needs to find riders who don’t already consider it a second-best choice. There don’t seem to be that many of them within a short distance of the West Seattle dock.

What about the Fauntleroy Ferry Dock?

Washington State Ferries service from Fauntleroy/Southworth/Vashon directly to downtown is not currently possible because they’re able to operate only two of their usual three docking slips while the new downtown terminal is being built. It’s possible that a ferry ride from Fauntleroy to Downtown is faster than the bus for a foot passenger in terms of raw travel time; I wouldn’t put it up against the C Line once all the dwell time and boarding/deboarding is figured in, though.

Work on Colman Dock isn’t scheduled to wrap up until early 2023. However, once it does, the Ferry System planners can be re-engaged about diverting services from Fauntleroy to Downtown. This could be a good time to also kickstart long-planned work to renew the Fauntleroy Ferry Dock as well.

I would push for the following package of solutions:

If the Water Taxi is supposed to absorb 20% of people abandoning driving, SDOT is going to have to think beyond capacity and make it an attractive trip for more residents. New trip pairs will help, but connectivity within West Seattle itself is equally important.

31 Replies to “The ferries and Reconnect West Seattle”