We are excited to share our endorsements for the 2021 general election!

Our picks are based on hearing from candidates at our June forums (Seattle City Council Position 9 & Mayor of Seattle), in questionnaires sent in May (City, County and Port), and keeping in mind track records and our prior meetings with candidates during our constant advocacy work. We endorsed the following candidates who will appear on your November 2nd ballot. Don’t forget to mail your ballot or drop your ballot in a dropbox before 8:00pm on Tuesday, November 2.

Current Seattle City Council President M. Lorena Gonzȧlez understands the power of land use and transportation in shaping Seattleites’ everyday lives and access to opportunities. In our June mayoral candidate forum, she identified a lack of density as one of our city’s greatest challenges to more rapid and reliable transportation, noting that density in small pockets alone is not enough to meet peoples’ needs and encourage them to use transit. This holistic approach continues with her dedication to multi-modal planning, including a focus on last-mile solutions. As she discussed in our forum, Gonzȧlez understands that a system is only as strong as its weakest links, and for that reason we need to ensure that transit improvements prioritize the needs  and concerns of BIPOC residents. She sang music to our ears by voicing support for  our House Bill 1304 in Olympia earlier this year, and with her simple answer to our candidate questionnaire question regarding how to address transit revenue shortfalls induced by Covid-19: “New. Progressive. Revenue.” Gonzȧlez comes to this race with the endorsements of five of her sitting councilmember colleagues and we look forward her mayoral administration in which council and the mayor are prepared to work together to plan for the reliable, renewable, rapid transit that our city needs and deserves. Vote Gonzȧlez

Though we endorsed Bruce Harrell when he ran for council in 2015, we can’t endorse him in 2021 for a very simple reason: He opposes putting an end to exclusionary zoning. Seattle Subway’s work is at the nexus of transportation and land use. They are two parts of a whole creating a livable, equitable, sustainable future. The concept of requiring a single, million-dollar home on most residential lots no longer makes any sense to us given our city’s housing crisis. We believe it is time to eliminate traditional single family zoning across the vast majority of the residential land in the city. We hope the next mayor will go even further than the Neighborhoods for All report recommendations. Bruce Harrell disagrees with us on this and we can’t endorse him this year because of that.

Teresa Mosqueda is one of the loudest advocates of any candidate in this election cycle pushing to give the City of Seattle more equitable access to faster transit. She has supported us in our efforts to get state authority to fund citywide exclusive right-of-way rail to connect most Seattle neighborhoods with Link, and she has supported our efforts to budget for the creation of a City-level masterplan for light rail corridors. Earlier this month, on opening day of the Northgate Link Extension, she told the crowd, “We need to build a Seattle Subway!” Mosqueda had many accomplishments during this current term. But there is one vote that we didn’t win that we want to mention here: we can’t thank Mosqueda enough for her vote in support of maximizing revenues in the Seattle Transportation Benefit District renewal, which voters passed with over 80% voting yes. If we and Mosqueda had successfully increased the funding in the STBD renewal, we wouldn’t have had as many cuts to transit service. We always look forward to agreeing with Teresa Mosqueda on the next transportation and land use issue to come up, and our only wish is for more Teresa Mosquedas on the Seattle City Council. Vote Mosqueda. 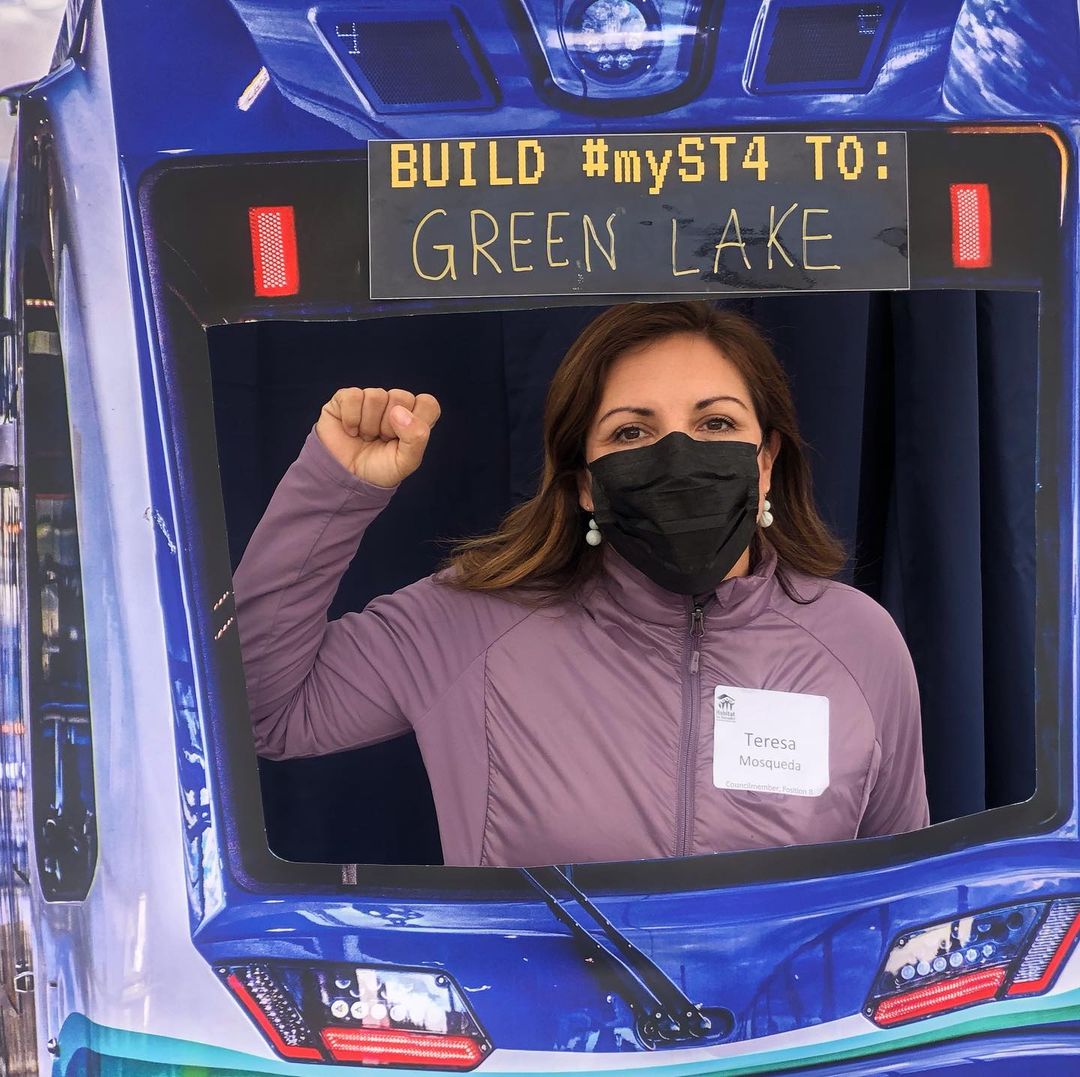 Councilmember Mosqueda at our booth on opening day of the Northgate Light Extension.

Nikkita Oliver said climate is an issue that impacts every aspect of civic life, from transportation, to housing, to labor, to accessibility, which makes the relative lack of action unacceptable. They recognize that Seattle voters are hungry to push the pace with respect to transit. Oliver also understands the strong connection between land use and housing affordability, contrasting themself to their opponent in clear terms that they support the end of exclusionary zoning. At a recent candidate forum, both candidates were asked the question: “You’ve both said you want to end single-family zoning in some form. What’s your vision for housing and how soon would you bring this forward?” Oliver’s response: ‘The real question here is, are we going to end exclusionary zoning’ … “this is really an intersectional issue that has a lot of moving parts” … we need to look at the ability to build deeply affordable housing. This means we can have density throughout the city and to push back against gentrification.” Oliver has also expressed their support for HB 1304, one of this Seattle Subway’s primary political goals, stating that they want to continue to pursue HB 1304 and similar legislation for transit. While they waffled in an earlier forum out of concern for regional connections, in our questionnaire they said “yes” that they will ensure Seattle’s plan to connect every neighborhood with Sound Transit-operated light rail is written by the end of 2022; and “yes” in their capacity as a city council member they will work with Sound Transit to ensure ST3 is built with future expansion in mind. ST4 here we come! Vote Oliver.

Running for King County Executive are two of the strongest public transit champions in the state. In fact, they call for many of the same priorities for expansion, program acceleration, and equitable transit-oriented development. That said, the US city with the most aggressive rail expansion program in the country is our city—Seattle. Within 2 decades, Seattle will have a metropolitan rail network the size of Washington, DC’s (which is the nation’s 3rd largest, in a metro area nearly double our size), and that is largely because of the aggressiveness and effectiveness of Dow Constantine. Dow, as Sound Transit board chair, embraced our vision to “Go Big” earlier than most and then led the effort across the finish line. Then, in 2021 when ST leadership sought to reset the goal lines and use COVID as an excuse, Dow had none of it and joined Claudia Balducci on an alternative proposal that demands approaches to expedite delivery. There is no avenue to unseat Dow with respect to transit and land use; he has the right policies and the proven experience. We do hope Joe runs again in the future and continues his energy and phenomenal work in the state legislature.

While we are excited about ST3, in this climate emergency it is important to note that ST3 is not enough; serving just 43% of Seattle’s urban villages is not enough. Seattle voters, we know, are ready to support such efforts with overwhelming majorities. We and future generations need Dow to show his proven, assertive and effective leadership once again to connect more of our City, meaning we need to find a path to another ballot measure on rail expansion before Dow’s next term is up. We cannot settle for a partially connected City. We believe Dow has the vision and skills to see that through. Vote Constantine.

Ryan Calkins has been a strong supporter of multimodal access to Port properties since he joined the commission. He remains an advocate for lowering driving to both the airport and the Port’s maritime operations, including most recently voting to pause efforts to expand the airport arrivals drive, in favor of finding more sustainable, less car-centric approaches. He is the only smart choice for this position. Vote Calkins

What’s there not to like about Hamdi Mohamed? She aligns with our values, she’s got passion, and wow has she got vision! Not only does she have a plan for Seattle and the Puget Sound region, she realizes the airport’s capacity and climate challenges cannot be solved by just airplanes alone and therefore advocates for statewide high speed rail connections.These are all of the traits we need in a policy maker that understands the kinds of transportation challenges that we face.

We unfortunately did not receive a response to our questionnaire for the incumbent, Stephanie Bowman. Her website does mention her goal of economic progress that’s “accessible” to all. However, the choice is clear: there’s an “it factor” that Hamdi brings to the table that cannot be understated, nor underestimated. Vote Mohamed.

The incumbent, Peter Steinbrueck, has been on the Port Commission since 2018. Over 15% of Link’s stations are in areas where the Port is a primary interest (SODO and the Airport). How people connect to these stations matter for sustainability and ridership. While Steinbrueck has opposed bike lanes in these key areas, Hasegawa calls for the Port to support the Seattle Bike Master Plan and more connectivity.

Where the port has made modest efforts for sustainability’s sake, Hasegawa takes a more aggressive stance much more in line with what’s needed to avert our dire climate predictions. She calls for a more aggressive effort to electrify the Port, to connect our cities with high speed rail, and to support the City’s efforts at non-car connectivity.

This election is a choice between modest sustainability efforts and a more visionary, inclusive approach. It’s for this reason that Seattle Subway joins both progressive and mainstream leaders in endorsing Toshiko. Vote Hasegawa.