It’s busy season for transit news around the Sound. Amidst the numerous announcements of late (zoning reform, East Link, state funding, oh my) the most concrete development has been the release of Sound Transit’s Draft Environmental Impact Statement (DEIS) for the West Seattle/Ballard Extension (WSBLE).

With the comment period now open and several virtual public meetings scheduled, we can focus on the proposed alignment. This material is intended to arm prospective attendees of these meetings with, at the very least, a general understanding of the options on the table.

This post will be the first of several in a “Deep Dive” series. Today’s will be “Interbay/Ballard focused”, to match the subject of the first public meeting being held on March 15th.

Sound Transit granted each alternative a memorable label; the preferred alternative for this section is “IBB-1a”. We can refer to this as Alternative 1a. 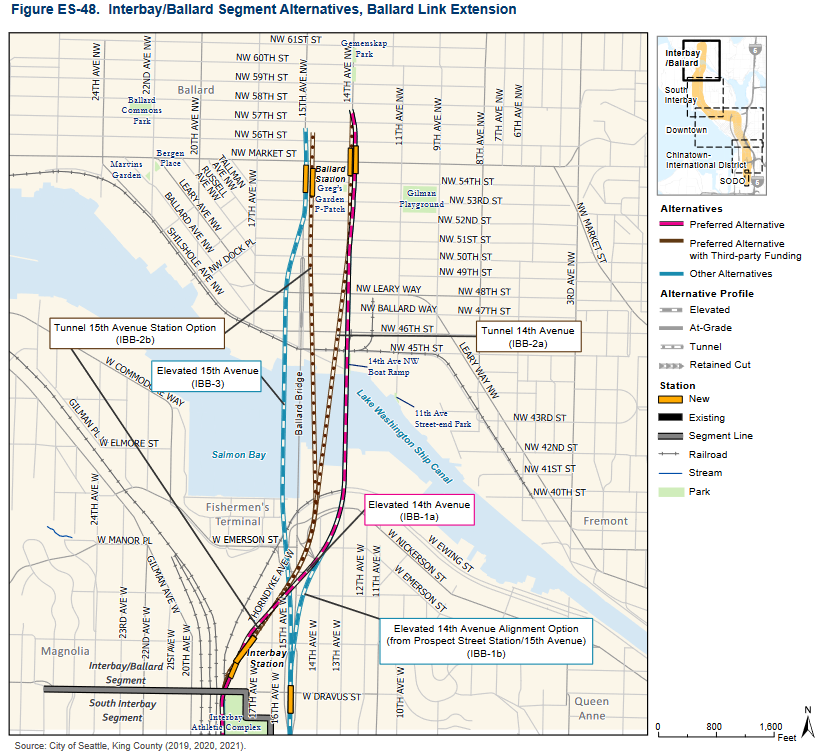 Each of the detailed route profiles contained in the DEIS can be conveniently viewed here on one page.

A few notes about the alternatives:

With access to 17th Avenue and the West Dravus bridge to Magnolia, the preferred Interbay Station site isn’t exactly fertile ground for transit-oriented development or bus connections. The alternative station location (effectively constituting Alternative 1b) is positioned 50 feet above the intersection of 15th Ave W and Dravus. Relative to the 1a station, this option entails more disruption (including a six month partial closure of 15th Ave) and more residential displacements (est. ~100  residents for 1a vs ~150 for 1b). Both segments have approximately matching price tags near $1.6 billion.

Alternative 3 suffers from the immense downside of being subject to inevitable delays across the moving bridge at the whims of the Coast Guard.

The tunneled routes benefit from minimal displacement, relatively shallow station depths (especially compared to other proposed WSBLE stations) and avoid disruption of the Burke-Gilman Missing Link Trail. That said, before getting too invested in these, consider this disclaimer from the DEIS:

Be sure to speak up in the comments about your preferred alternative. Which station pair supports the best value for ridership? Do the tunneled routes merit overcoming the potential funding obstacles? How would an elevated or underground Ballard terminus impact a future UW or Crown Hill extension?

Feel free to chime in with any feedback on the format and information in this post as well. I’ll do my best to integrate suggestions into the next one.