Metro is seeking input on “Phase 2” of Lynnwood Link Connections. In Phase 1 they gathered input on what the public wanted, and now they have taken those ideas and proposed a restructure. There are several themes common with this proposal, which are listed after the map. 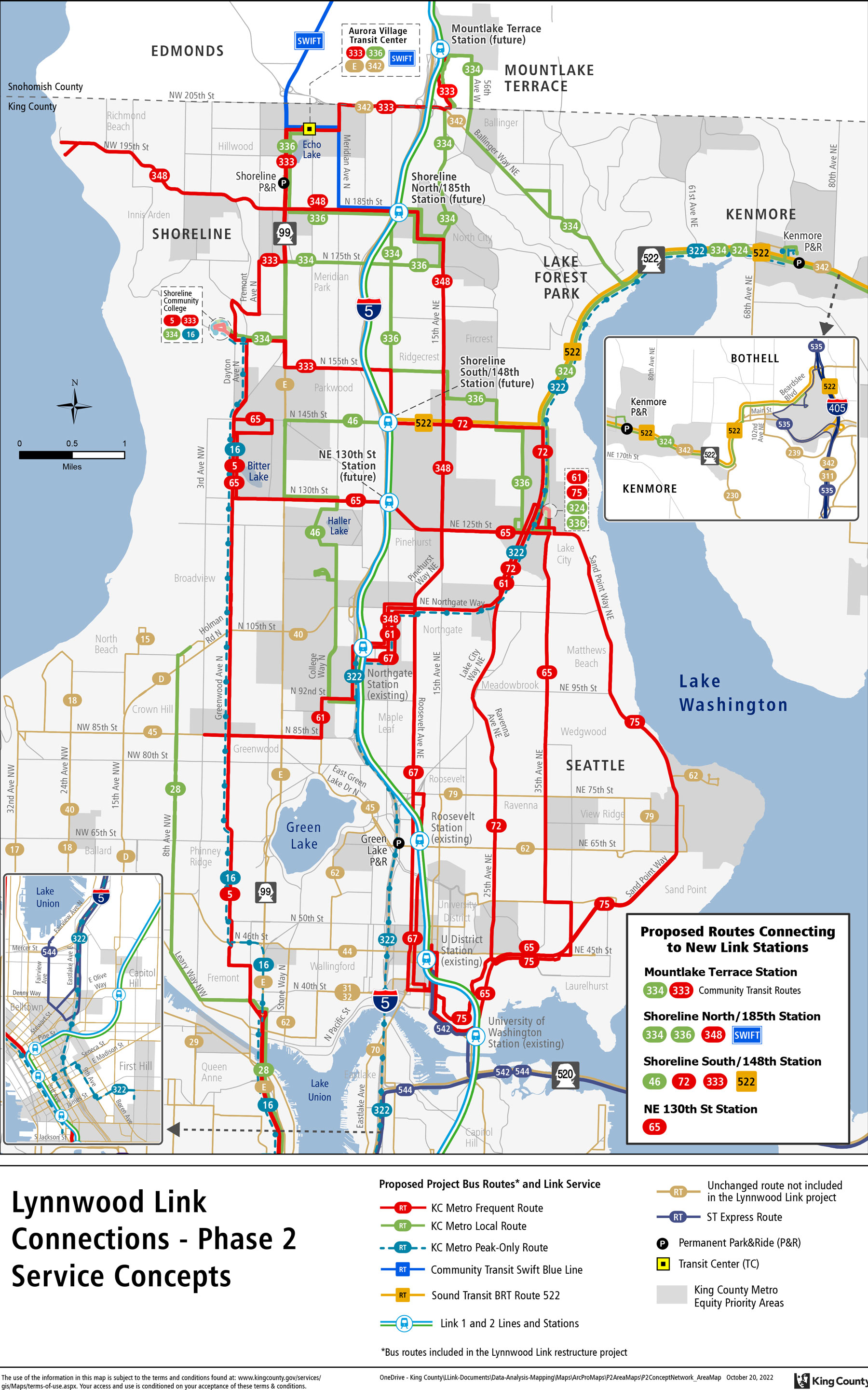 After the Northgate restructure, there were 5 express buses from the north end. Now that is down to just one — the 322. It is the only bus to go over the I-5 ship canal. Buses will instead connect to Link. This reflects a move away from expensive, peak-only express routes, towards a more all-day system.

But that isn’t the only place where service is being simplified. Several corridors will no longer have coverage. The 73 is gone, which means no service on 15th NE between Pinehurst Way and 75th. 5th Avenue NE, between 120th and Northgate Way (served by the 75 and before that the 41) will no longer have service. The 346 is gone, and with it is service on Meridian between 130th and 200th. There are more, but the most controversial change (to me, anyway) is the loss of service along Lake City Way between Ravenna Avenue and Roosevelt Avenue.

One of the big suggestions to come out of phase one was to improve east-west travel in the area. Several routes help accomplish this goal. The 61 replaces the 20, linking up Greenwood with Northgate and Lake City. The 65 now covers the 125th/130th corridor, connecting Bitter Lake with Lake City and 35th NE (making a trip from Ingraham High School to Nathan Hale High School a one-seat ride). Instead of going north, the (3)72 heads west, to the station at 148th. Riders can continue to Shoreline by taking the 333 further west. There is now coverage along 175th (via the 334) while the 336 and 348 go over 185th. Finally, the 333 runs along the county border, connecting the Mountlake Terrace Station with Aurora Village and Shoreline Community College.

Routes are Split Based on Demand

The 372 is split into two routes: The more frequent 72, and the less frequent 324. The 75 ends at Lake City, which means it is largely a coverage route for Sand Point Way. As a result, it is slated to run less often (30 minutes outside of peak). The 331 is more or less split into two, with the eastern half (the 334) running a lot less often than the western part (the 333).

Overall, I consider this a strong step in the right direction. I have ideas for changes, but I’ll make that another post (along with comments here). Survey ends March 10th.