Madison Park resident Reg N, after some discussion earlier this week where he vigorously objected to Metro’s Alternative 1 plan for extending the 8 to Madison Park in place of the 11, recently presented his own attempt at a restructure. (He later added that “there is an error on the map (hopefully corrected soon) the 11 will turn to E Pine at E Madison to Broadway and then south to Madison.”)

The newest feature of his plan is a “Most-of-Madison” route diverting to at least part of the main Capitol Hill business district. This seems to me a significant advantage over an all-Madison route skirting the south edge. The only disadvantage I see is in terms of speed – though, as usual, aggressive signal priority and reduction of parking could help.

Another very good proposal of this plan – which I think is its single best feature – is truncating the 8-North to Capitol Hill Station, rather than extending it to Madison Park. This would safely insulate everyone else from the Denny Disaster, given SDOT’s reluctance to consider innovative solutions such as restructuring the freeway entrances or building a gondola.

The less-satisfactory elements of this plan are focused around enabling everyone to access the one single Capitol Hill Station: restoring the 43, turning the 48-South to Capitol Hill Station (down John), and moving the 49 to 15th to replace the 10 (leaving no service on 12th). While they’re definitely not the optimal solution, their appearance here reminds us that long-distance station spacing can make it significantly harder to plan bus routes. 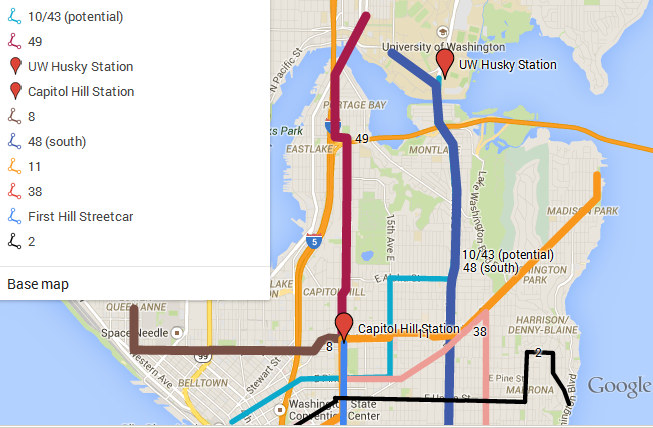 My new proposal would be:

People who’ve been paying attention to Alternative One are probably screaming “But the 49 will be at 10-minute frequency and the 38 at 15-minute!”  That is a problem, but turning back every third bus at CHS or Broadway and Madison – and letting another lay over for five minutes – can solve it.  Or, perhaps the other buses can be through-routed with the 60.

The 11 has room for 10-minute frequency without going over the Alternative One budget (ignoring the 43 idea), since all its corridors had 10-minute frequency there.  I might downgrade it to every-fifteen-minutes, to allow the 47 to be restored and the 3 to be upgraded to fifteen-minute frequency all the way out to Madrona.  But, then, all these musings are more or less moot until we see where Seattle decides to spend its Proposition One money.