In 2018, Sound Transit continued to avoid the national decline in transit ridership, according to the agency’s latest service numbers.

END_OF_DOCUMENT_TOKEN_TO_BE_REPLACED

Thursday night, I prepped the below table for a Friday interview that hopefully will go public Sunday at 12:01 AM.  But I figured it was time to put together a ridership table for the controversial Sounder North train run.  I got the Average Mean Daily Ridership by dividing the quarterly total boardings/ridership by 65 or 13 weeks X 5 days.  I then divided that number by two to get an – arguably inflated – estimate of the users using the run round trip under “AMDR/2 for Round-Trip Estimate“.  Finally due to Sounder North’s ridership depending on among other things slides and the economy to record growth by the same quarter in the previous year.  Hopefully this helps the conversation.

So here you go.  It appears to me from the above we’re talking about a transit service that only serves 500-600 regular commuters or so.

If you want the Excel table, please e-mail me at growlernoise-at-gmail-dot-com and put in the subject line, “SOUNDER NORTH EXCEL SPREADSHEET PLEASE”.

Also would like to embed the spreadsheet, but having no luck.

Programming Note: I also yesterday had less than optimum ridership experience using Sounder North – again partially due to a need to see the Mukilteo Station’s behind schedule progress for North by Northwest – and will write about that next week after I verify some things that affirm my views on Sounder North.  Also will hopefully, finally get an Island Transit update out the door.

There’s a habit of considering ridership projections as an essentially political document — and with all the arguing, perhaps they are — but at its heart lies a technical model with actual inputs and assumptions. One of those inputs, of course, is previous ridership, when that data exists.

I’m a bit late on this, but now that ST has a full year of Central Link ridership data with Seatac station included, it has another input to its model. As that ridership was lower than expected, it’s caused a general downward revision to ridership going forward. The upshot is that 2011 ridership is projected to average 25,000 weekday boardings, instead of 31,000. There are also revised estimates for Tacoma Link, Sounder, and ST express.

ST spokesman Geoff Patrick tells me that these estimates are the first that use 2010 ridership as an input. They also incorporate the latest economic forecasts; Patrick points out that “there are 30,000 fewer jobs in downtown Seattle today than there were in the year 2000.”

It’s a little odd to me that there’s still supposed to be a big jump in 2011, and then much smaller increases through to 2016, so my (totally amateur) instincts tell me this number is still too high. In any case, models are always wrong, although they do have their uses. In the next few days, we’ll have a more detailed analysis of the ST ridership model and its errors.

On a completely unrelated note, don’t feed the trolls. 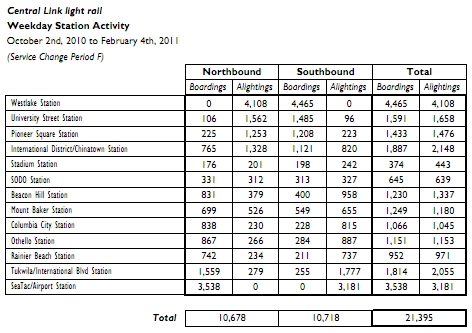 I’m a big numbers nerd, and when I came across these graphs of Q1 Link ridership data I felt had to share them. It’s pretty interesting to see what time rush hour is for Link and that Friday is the line’s busiest day. Make sure you read Martin’s “how to understand ridership numbers” post before drawing wild conclusions from these.

END_OF_DOCUMENT_TOKEN_TO_BE_REPLACED

My generic curb your enthusiasm disclaimer is here.

I doubt anyone’s mind is on transit stuff this morning, but alert reader Bruce Nourish did a public records request and got detailed route-by-route information from Metro, which he’s thoughtfully offered up in a Google spreadsheet.

Metro provides good systemwide aggregates, and (untimely) route-by-route statistics, abstracted into per-hour numbers that make it hard to say how many people board a bus route. Although Bruce’s data is still from 2009, and therefore predates Metro changes driven by Central Link, has tons of raw numbers pertaining to miles traveled, operating costs, and ridership.

I don’t have any particular conclusion to draw from the numbers, but as always we’re interested in any interesting, intellectually honest points people wish to make in a guest post using this data.

According to the bean counters at Sound Transit, Link ridership was up in March. 18,094 boardings occurred on the average weekday in March, an 8% leap from 16,741 in February. March 2010 has had Link’s highest weekday ridership so far.

The jump could reflect Metro’s February bus service changes that included ending the 194 route to the airport, and could also reflect a less gloomy economic picture.

We caution readers not to extrapolate too much from a one-month gain in ridership as the data set is too small to make strong conclusions in one direction or the other. Link wasn’t built for its first year of ridership, it was built to serve the region for decades to come. The raw data is accessible here (pdf).

The 2010 Service Implementation Plan (pdf) from Sound Transit predicted that ridership would average 26,600 across the year, a figure that is unlikely to be met. Sources at Sound Transit have told us those estimates do not reflect the lower-than-planned train frequencies and the fact that fares are charged in the Downtown Seattle Transit Tunnel, and do not account for the deep recession. It’s unknown if the 2011 Service Implementation Plan will continue to use unreliable estimates.