After a bumpy start, the Move Seattle levy is slowly starting to spend significant funds, SDOT staff told the Council’s Sustainability and Transportation Committee on Tuesday.

The meeting began with advocates from the MASS coalition giving testimony on the need for prioritizing buses in a time of climate crisis.  Committee Chair Mike O’Brien agreed, noting that if the city is going to ask people to ride transit, it ought to be reliable and convenient.

SDOT staff presented the quarterly oversight report, which includes a status update on dozens of levy-funded projects.  Spending has been lagging for several years now, due to a combination of factors, including an uncertain federal funding environment, difficulty hiring construction firms in this white-hot labor market, Mayor Durkan’s 2018 “reset,” and a surprisingly cold and snowy winter.  Indeed, money is being shoveled out the door even slower than SDOT had forecasted just six months ago: 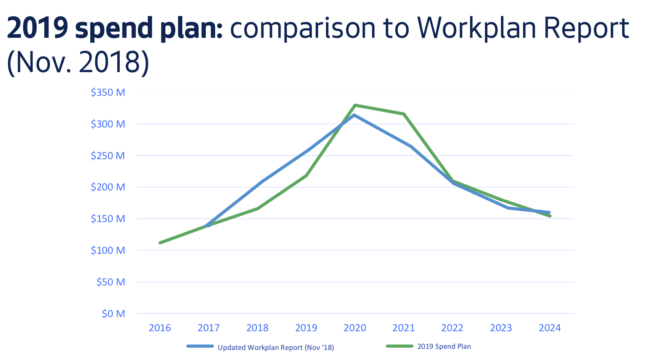 Still, despite the snow and the Seattle Squeeze, this was the busiest Q1 to date in terms of project spending: 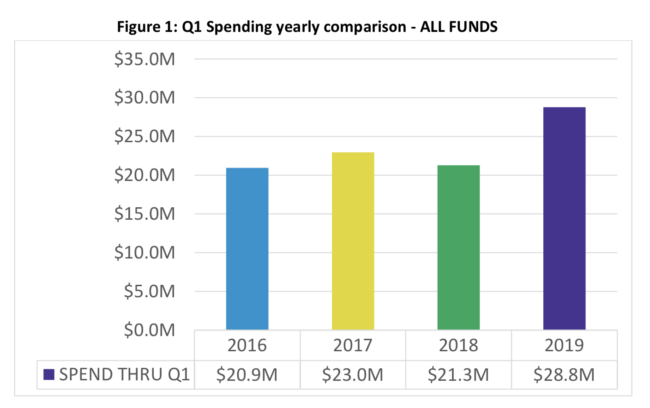 Staff were generally optimistic, pointing out that the Lander St. Overpass project is now $20M under its $130M budget.  On the other hand, contracting issues are causing challenges with the Northgate pedestrian bridge project (though the project as a whole hasn’t yet been delayed).

We’ll get more updates on the multimodal corridors, including RapidRide improvements, later this year.  Most corridor work will be in concert with Metro (e.g. RapidRidge G & H), though on Rainier Avenue multimodal updates will arrive in 2022, before RapidRide bows in 2024.

Finally, later this year SDOT also plans to identify a potential new location for the Mt. Baker transit center as part of the Accessible Mt. Baker project, which will be a welcome improvement.

Mayor Jenny Durkan retained Anne Fennessy, of public affairs firm Cocker Fennessy, to represent the City of Seattle in planning for the final alignment of ST3’s West Seattle and Ballard Link segments. Durkan’s office also told STB that the search for a new, permanent SDOT director is “underway,” started “earlier this fall,” and that the hire should be announced soon.

Durkan spokesperson Chelsea Kellogg says that the search is similarly to the recruitment of new City Light CEO Debra Smith, who was hired in April:

“National search conducted, employee review panel interviews candidates, senior leadership from other departments interview candidates. The Search Committee then reviews candidates resumes and interviews the candidates which has already taken place. The next step is interviews with the Mayor, which are happening this month.” END_OF_DOCUMENT_TOKEN_TO_BE_REPLACED

The One Center City (OCC) Advisory Group, tasked with developing a plan to increase mobility in central Seattle during the impending period of maximum constraint, released its recommendations for near term capital projects in June. The plan must still be approved by the Seattle City Council and other stakeholders.

Early discussions proposed transformational changes downtown and large-scale bus service restructuring, neither of which materialized in the final list of projects and improvements.

The OCC group was formed in order to proactively keep megaproject-related pain to a minimum over the course of 2019-21. During that time, Highway 99 will move from the viaduct to the new deep-bore tunnel, the Washington State Convention Center expansion will close critical parts of the grid, a critical bridge in South Lake Union will be closed and rebuilt, and the transit tunnel will close to buses forever.

The most significant changes that the OCC group endorsed are northbound transit-only lanes on 5th and 6th Avenues. Some Metro routes will move to those streets from 4th, while Community Transit and Sound Transit buses would remain in their original configuration.

The hope is that the 4th Avenue buses will benefit from a lower volume of bus traffic. SDOT would also invest in queue jumping and signal priority for buses on both 2nd and 4th. However, since overall traffic on all downtown streets is expected to increase during the period of maximum constraint, the gains for 4th Avenue buses might be marginal.

END_OF_DOCUMENT_TOKEN_TO_BE_REPLACED

Last Thursday, SDOT’s Accessible Mount Baker project manager Michael James—a youthful guy with an indifferently tucked shirt and an eager smile, presented an intriguing, but still unfunded, proposal to improve the transit, bike, and pedestrian connections around and between the Mount Baker light rail station on the west side of MLK and the Mount Baker Transit Center on the east side of Rainier.

The meeting, held in the windowless Kings Hall building behind the station, turned out a few dozen committed residents for tortilla wraps, a mixed-fruit platter, and a detailed discussion of what the station area might look like in the hands of SDOT’s “Accessible Mount Baker” team.

Although the city hasn’t identified any specific funding source for the project, expected to take up to a year to build, James said it was consistent with SDOT director Scott Kubly’s vision for spending the money raised by the Move Seattle levy, an ambitious $900 million proposal that will, if voters approve it in November, be roughly twice the size of the 2006 Bridging the Gap levy it would replace.

Like Martin, I can attest that the Mount Baker rail station and the flat concrete expanse of the Mount Baker Transit Center across the street are underdeveloped, poorly connected, and confusing even to a longtime transit rider like myself.

END_OF_DOCUMENT_TOKEN_TO_BE_REPLACED

Sound Transit and the City of Seattle will be holding an open house at Seattle’s First Baptist Church on Saturday, June 26th to discuss recent developments and the next steps involved with constructing the First Hill Streetcar line connecting the Capitol Hill and International District LINK Light Rail stations.

The Seattle City Council has approved the route for the Capitol Hill and First Hill segments and will have new design concepts for Broadway available for viewing as well as guests involved with the project who will be available to answer questions.

In addition, Sound Transit and the City of Seattle will have an information booth set up at the Capitol Hill Pride Festival on Saturday, June 26th.

Update 1:20PM: I spoke with the folks at the Seattle Streetcar re: wonky station names and they replied that they have been monitoring the station name discussion on this blog. When they get to the point where the station locations are fixed, they will try to make the station names as obvious as possible to help guide people and avoid confusion. Furthermore they are open to suggestions.