An interesting SurveyUSA poll has been released showing some data about the Sound Transit 2 plan. For some reason, there’s no data showing how many voters survey supported the plan. I believe you can take the amount of registered voters from the other data (about 520) and subtract that from those who said they oppose the plan (about 252), and you’re left with the “yes” or “undecided” voters, but I’m not sure of the exact methodology here. In any case, let’s look at the data that SurveyUSA has posted.

The first interesting question was asked of 252 votes who oppose the ST2 plan: Why are you opposed to ST2? 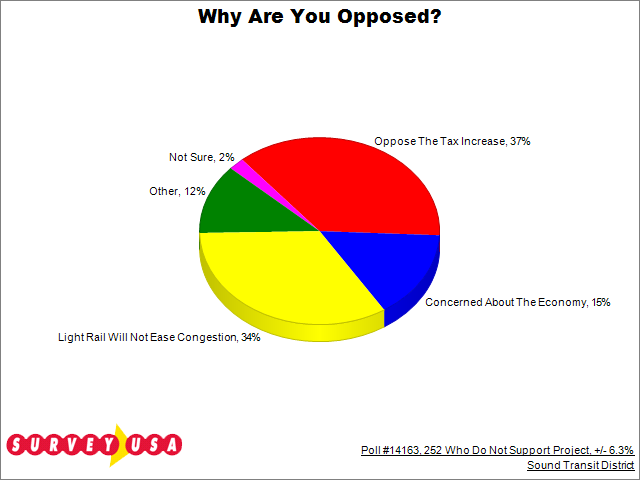 First of all, this question is not open-ended so the responses are by nature pigeon-holed. For example, there would be no way to say that one supports BRT over ST2 without saying “other” — voters who feel that way will be inclined to state one of the listed position.

I think if someone opposes the plan already they have probably made up their minds, but these may be the arguments that ST2 opponents will make to their friends, family, and the Internet: No new taxes, not right now, and light rail doesn’t solve anything. Us who support ST2 have to have good responses to if we expect to win the vote.

Next, voters were asked about the best way to fix our region’s transportation problems: 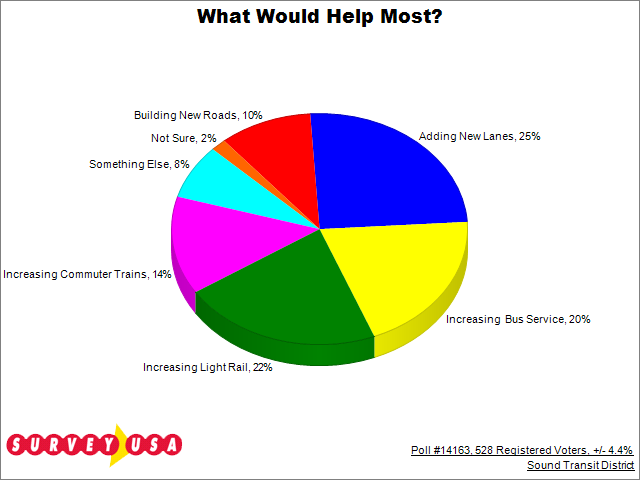 In other words, 56% of voters think the major components of ST2 (bus service, light rail, commuter rail) help the most. 35% think that building new roads or new lanes is the solution. This is good news for transit fans, and shows that more and more people are beginning to understand that asphalt can’t be the answer.

(In some cases people who are pro-transit may just be reflecting their commute. For example, a Microsoftie who loves light rail may say that building a new lane on the 520 bridge is vital — and he’s right, we need an HOV lane across that bridge. Clearly, not all new lanes are created equal.)

The cross-tabs for this question are fascinating. 50% of Republicans and 46% of Snohomish County residents feel that building new roads/lanes is the solution, compared to 35% (as stated above) for the region as whole. 28% of King County thinks light rail would help the most, while 17% of Pierce County and 11% of Snohomish County believe the same. Commuter rail polls about five points in Pierce County (17%) better than King and Shomhomish, obviously reflecting the success of Sounder.

We must frame ST2 as delivering the bus service expansion that 20% want and the commuter rail expansion that another 14% want. Everyone knows that ST2 offers light rail, but some may not know of its near-term bus service improvements as well as the SR-520 bus rapid transit line or the Sounder service improvements. Of course, we need to further educate voters that relying on new roads won’t cause gas prices to fall.

Next up, we’re looking at ST’s favorability: 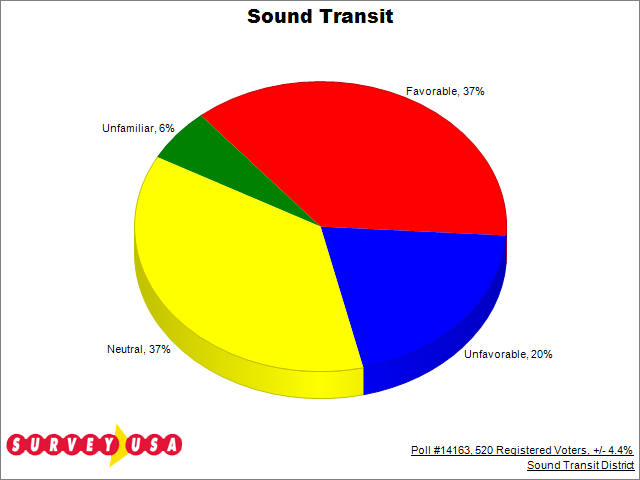 Nearly double the amount of favorable as unfavorable, that is pretty good. “Neutral” can only shrink after light rail comes online in 2009. Which leads us to this last question: Did you get your money’s worth from 1996’s Sound Move vote? 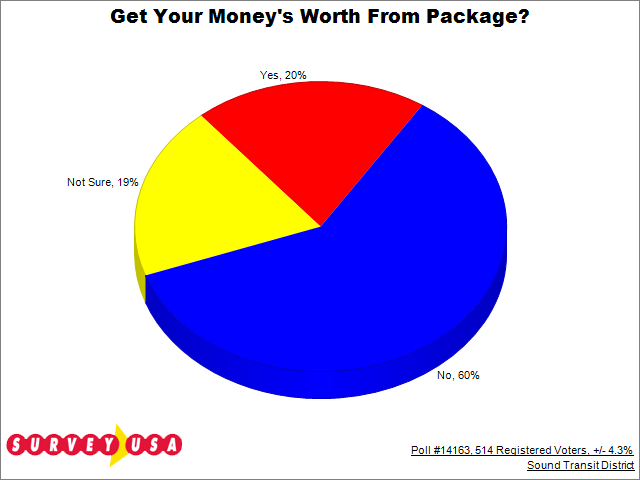 I feel that another big vulnerability for ST2 is that Sound Move isn’t yet done. We need to emphasize that Central Link is on-schedule to next Summer, and the extension to Capitol Hill and UW is proceeding with construction.  However, I can understand voter’s frustrations here. Even a transit supporter who lives along Rainer Valley may not have gotten his money’s worth until Central Link opens. This isn’t an argument to delay the vote — we simply can’t be idle anymore — but I’m just arguing that this perception is fluid and voters likely realize that.

Some darn interesting numbers, though I wish we had data on the percentage of voters who support the plan and why they do. It would be nice to see which arguments resonate with voters.

(I should note that I chose not to echo ECB’s analysis from the Slog since the margin of error for that particular question is 3.5% providing a statistical dead-head for that question. Also, the question was asked of all polled votes — not just those who opposed the package as she misstated.)