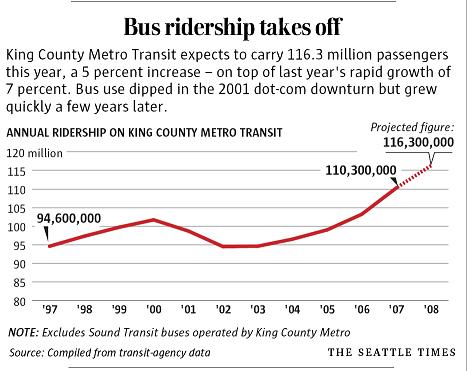 The Times has a pretty detailed analysis of the crowding we’re seeing on buses in King County and Snohomish County, and also has a nice graph showing bus routes by increased ridership, and descriptions of which routes are leaving riders behind. There’s also a section on how to solve the crunch, a couple of points I found interesting:

On Sept. 20, money from King County’s 2006 Transit Now sales-tax measure will add trips to 10 Seattle routes, as well as high-ridership lines serving Kent, Overlake, Redmond, Bellevue, Northgate and Green River Community College, and a new route to Seattle from Snoqualmie and North Bend. Another 30 buses are due next year.

Sound Transit soon plans to add buses on its lines from Everett and Lynnwood into Bellevue. Community Transit is buying 23 double-decker buses to replace smaller buses on commuter routes, and it is adding 15 buses to launch its bus rapid transit service next year on Highway 99.

We might not get much out of Transit Now:

But it’s not clear if Metro can provide everything it promised voters in Transit Now, including new bus rapid transit lines serving Overlake, West Seattle, Ballard, Aurora and Federal Way by the early 2010s.

But we will get likely get another fare increase

A proposed 25-cent fare increase at Metro would yield about $10.3 million a year — tackling only part of a predicted $30 million to $40 million yearly deficit. The agency could sell land, eliminate the idle Seattle waterfront streetcar, dip into rainy-day funds or seek fare hikes. A recent dip in diesel prices could provide some relief, but not enough.

Snohomish County on Oct. 1 will raise fares by 25 cents or more, depending on the length of a trip.

There’s a mention of the Mass Transit Now measure, but not a very positive one:

In an $18 billion ballot measure this November, Sound Transit is including a boost of 100,000 yearly bus hours and more south-end Sounder trains. But the lion’s share of the money would go to build light rail to Lynnwood, Overlake and Federal Way, which would open in the early 2020s. King County Executive Ron Sims opposes the plan, arguing that buses need more money, right now.

There’s some light rail opening next year… No mention of that.

The routes skipping passengers most often:

I haven’t been left behind yet. Has your bus left you behind, or have you seen your bus leave others behind?