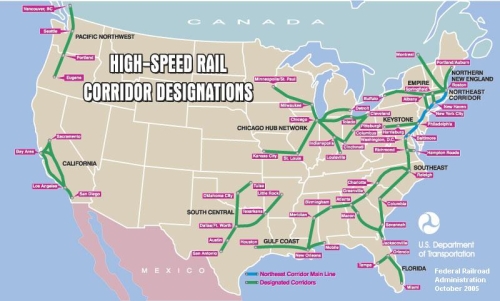 These are the high speed rail corridors the USDOT has identified in their overall plan. If your rail line is on one of those green lines, and we ever pass an Amtrak funding bill with grant money for high speed rail, you can get those grants. Note that Amtrak Cascades is one of those corridors.

Given that the California project is $40 billion (although that’s not all of those lines), I’d say we could get most of this done for $700 billion. This could be our new Apollo project  – it would create jobs all over the country, we’d probably end up building at least one new railcar company (as well as helping the ones we have), and you can bet this would spur more renewable energy development.

While we need a New New Deal for infrastructure, we don’t really have the money. Especially not if we’re giving it to banks.