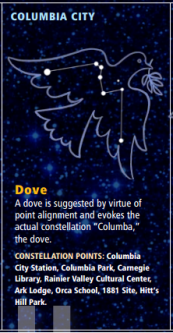 While we’re on the subject of art, one interesting tidbit I learned about at the MLK Street Fair was the origin of the pictograms associated with each station. It turns out they’re supposed to be constellations, as explained in this brochure.

The basic idea is that one plots out the locations of several points of interest in the vicinity of each station, and then connects those points in a way that suggests some shape, which then becomes the pictogram.

For example, in the Columbia City “map” at right, the leftmost “star” is the light rail station, and the other stars are various landmarks along Rainier Avenue. All in all, it requires a healthy dose of imagination, but no more so than real constellations.

I suppose the pictogram program is an attempt to make the system more accessible for the illiterate and non-English-speaking, and that’s fine enough. It might not have hurt to come up with a scheme a bit easier to reverse-engineer, but how such a scheme would work isn’t immediately clear.