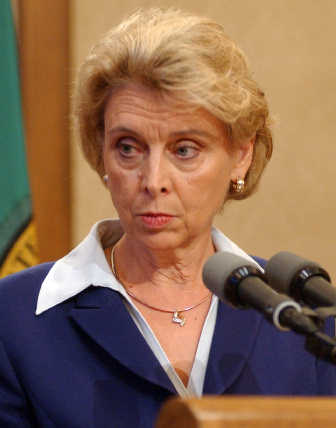 Here are some highlights – or mostly lowlights – from the transportation section of the Governor’s budget proposal put together earlier in the month. The budget is “balanced” for the next six years, which means that given projected revenue and planned spending, the budget will not require more cuts or increases for each of the next three two year (biennium) periods. The numbers aren’t pretty for that six-year period or the following biennium (2015-2017), where there’s a $850 million shortfall.

This budget will be brought to the legislature, who will make a fair number of changes before sending this back to the governor to sign into law. So don’t take the list below as guaranteed, though it portends of the cuts to come. I wonder how much this will resemble what does get through the legislature, and I hope the few bright spots, shown below, don’t get hacked out of it.

This budget is horrific. Funding for the Point Defiance Bypass is pushed way out, since it’s not in any budget through 2015. That project was already underfunded by $15 million, and now it could be underfunded by $50 million. This means there won’t be Sounder service to Lakewood for at least that long. The Vancouver Rail Bypass is also absent from the budget. The ferry budget is only balanced for 2009-2011, and even that that’s with service reductions and fare increases. After that ferry budget shortfalls reappear in the 2011-13 biennium, and in the 2013-2015 biennium.

There is a massive $30 million, or 43%, cut to the  Regional Mobility Grant Program. These grants are used mostly to fund park and rides and rush-hour transit service. Projects like Community Transit’s SWIFT get most of their capital funding from these grants and the South Lake Union streetcar also got a sizable contribution from this program. A 43% cut to this program is essentially a 43% cut in the state’s contribution to transit capital improvements.

Gory details below the fold.

Most of these roads projects I won’t miss, and any progress on 520 is welcome news, since there never has been a funding plan. The vanpool, park and ride, and commute trip reductions are an earnest improvement. I pray that these make it into the official budget the legislature adopts.

Each of these could have a series impact on transit or passenger rail service over the next coming years. The 5.7% rail cut is huge.

Going forward, there are huge gaps in the ferries budget for 2011-2013 and 2013-2015. The cuts are so serious, that the ferries are looking to pass operations on to locally funded ferry districts. By 2015, the Washington State Ferries service will not exist in the same form as they do today.

Help us, Barack Obama, you’re our only hope!

29 Replies to “Transportation in the Gov’s Budget”