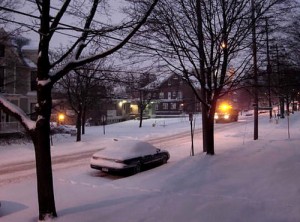 Mayor Greg Nickels has reversed city policy in making it clear that salt may be used during future snow storms. Salt had previously not be used in Seattle due to the real concerns of its environment impact on Puget Sound. Salt, however, is one of the few effective ways to actually expose asphalt during large snowfall.

The mayor set certain conditions for using salt: on hills, arterials or snow bus routes, and on routes to hospitals and other emergency facilities when at least 4 inches of snow is predicted, if ice is predicted, or if extreme cold is expected to last more than three days.

It seems as if these conditions are stringent enough to limit the environmental impact, and we hopefully won’t need to use salt every year. Personally, I am happy to see this change since Seattle city streets being covered with ice made it impossible for Metro to provide effective bus service.

Next Monday we’ll be looking at the performance of our transit agencies during the storm and begin a dialog on some changes to prepare for future storms.

9 Replies to “Seattle to use Road Salt During Future Storms”