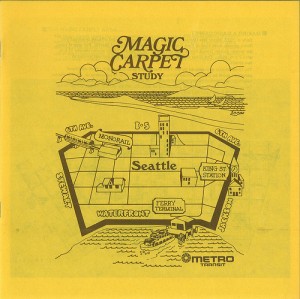 Once again, ECB has called for Ride Free Area to be eliminated. As we’ve argued before, the Ride Free Area makes buses flow through the congested downtown area quicker. ECB is a smart and strong supporter of transit and it’s great to see her reference some of the comments made on this blog, but we do disagree when it comes to the Ride Free Area.

Yes, the Ride Free Area can be confusing. Some routes you pay when you enter, others you pay when you leave. Sometimes riders paying with cash have to get a transfer on one side of downtown, and show it to the driver when leaving the bus on the other side of downtown. Seattle transit-types will boast that it’s not hard to figure out — but it certainly isn’t easy for new-comers. When I used to bus around Redmond, the handful of times I encountered a pay-as-you-leave bus I was completely lost.

But, it lets riders board and depart through all sets of doors while in downtown, the most congested part of the bus network. It does not cause revenue to be lost for Metro (the city and downtown business owners pick up the tab). And it makes the entire system operate more efficiently.

Read past the jump to see why we should keep the Ride Free Area around for now, and how we can get rid of it in the future. 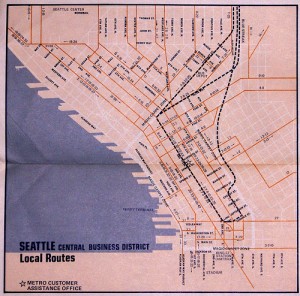 While ECB has claimed that eliminating the Ride Free Area would make the bus system more reliable, I have to disagree and say that the opposite is true. Outside of downtown, there are very few stops that see a mass exodus of people such that departing the bus is a pain. (One exception I can think of is the 194 airport bus, but that problem is going away soon.) Most stops outside of downtown only service a few routes, and typically only one with any frequency.

However, you can imagine if 3rd & Pine required transit riders to pay when they entered: The line of transit riders at the front door waiting to pay could result in the many other buses serving that stop to be held up.

Many other big cities don’t operate a Ride Free Area, so why is Seattle different? Most cities don’t have a big downtown, where a lot of commuters transit usage (~40%), that relies solely on buses. Indeed, the expansion of light rail certainly helps make eliminating the Ride Free Area look tenable. So does the implementation of the next smart fare card, ORCA, which I spoke about earlier today.

What’s ironic is there are also a lot of questions being floated about ST relying on ORCA too early.

If you want to get rid of the Ride Free Area then ORCA is the clearest path to that. ORCA is a good thing for our transit system. By ensuring that most of the transit-riding population uses a single smart card that works across all agencies in the region, one can ensure that boarding times are reasonable even with crushing loads.

Too many riders in Seattle use tickets and cash to pay their fares, causing system-wide slowdowns. By eventually requiring transfers and other niceties to be handled by ORCA, ticket/cash use will go down and we’ll have a faster, less-confusing transit network.

So I endorse the approach to simplify everything: Move everything to ORCA. Move many commuters to more robust rail. Eliminate bus paper transfers after enough consumer education has occured. Eliminate PugetPasses in favor of ORCA cards with the same functionality. If someone wants a day or week pass, have it be an ORCA card. Try to minimize cash payment on buses and single-use light rail tickets. And then, yes, eliminate the Ride Free Area.

But this vision is quite a journey from reality. In the mean time, we should accept the Ride Free Area and the irritating confusion that comes with it..

(Photo credit to the Seattle Municipal Archives and to reverendkomissar respectively.)