On April 28, two King County Council committees combined to receive a report from Metro on proposed Southeast Seattle and Southwest King County service changes, followed by public comment from both the official citizen sounding boards as well as fully private citizens. The two-hour-plus video is archived here. A boatload of supporting documents is accessible from this page and this one.

We’ve covered these proposed changes extensively, but here’s what’s new from the meeting:

The only significant difference between the Sounding Board reports and the Metro Staff was the use an extended Route 8 to provide local service along MLK. The SE Seattle Sounding Board proposed using Route 48, with similar service levels, instead. Although 48 service is likely to be less reliable than the 8, the one-seat ride to the University and other locations along 23rd is highly prized. 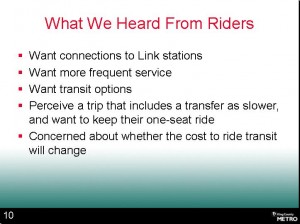 Note that given a static or falling operating budget, items 1 and 4 are in fundamental conflict with each other.  Those transit planners earn every dime.

Although Metro did a decent job of tweaking things to improve station connectivity, I would say that preserving existing rides won out. It’s not hard to see why if you watch, on the video, the parade of representatives from the Asian Counseling and Referral Service (ACRS) lamenting the idea that to get downtown they’d have to either transfer or walk three blocks to the Route 7 stop. The intriguing Route 50 (Seward Park-West Seattle) proposal died partly because of the VA Hospital’s need for a direct link to downtown, since the hospital’s entrance faces away from the 36 that goes right by on Beacon Ave.

That’s not to belittle the legitimate interests of clients and patients who might be elderly, disabled, or mentally ill, or to ignore the really unfortunate architectural decisions that have made these facilities poorly adapted to the transit that surrounds them.  Still, one wonders if the paratransit system might be a better alternative than allocating thousands of bus hours.

Aside from peak-only express routes, the most obvious routes to delete are the 194 and 42, in that order, and both mobilized a lot of negative commenters in this session. Public comments are a poor way to investigate the tradeoffs in service planning, but there were some other interesting themes:

Note: The author served on the Southeast Seattle Citizen Sounding Board.  The board report does not fully reflect his views, nor does this post represent the views of the Sounding Board.